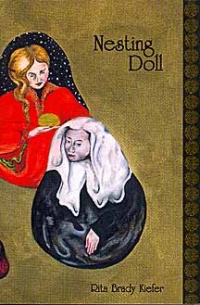 In Nesting Doll, Rita Brady Kiefer celebrates the power of words to transform life while exploring the mysterious ways memory and language help shape each other. Throughout twenty poems, Kiefer brilliantly explores the way in which women and religious subjects interrelate, handling a great many psychological subtleties with ease and in straightforward verse.

The title poem, "Nesting Doll," is emblematic of how we attempt to uncover layers of personality in order to discover what it means to inhabit a human body while at the same time exist in a community. This seven-part poem places at center stage women from Kiefer's individual history who resonate with women from our own. Another selection, a sequence of poems known as the "Sister Mailee Sequence," offers a lyric perspective on the poet's "previous life" as a Catholic nun. This particular piece calls into question the permanence of vocation and examines endless possibilities of the relationships between an individual's spiritual and sensuous lives. The final poem is an elegy for one of the four churchwomen murdered in El Salvador in 1980.

Whether the poems in this volume originate from Marie Curie's thumbs ("near senseless from chemicals [she was that in love with looking]"), a campus tree that keeps returning ("4maybe5timescutdown"), or the voices of "my sweet . . . diaphonous . . . dead," the images created rely on the silences surrounding Kiefer's words as much as what is articulated. Whether reflecting tentative constructed human relationships or connections with the natural world, this collection of poems embraces uncertainty as a way of being.

Rita Brady Kiefer’s poems have appeared in two anthologies, Face to Face (2004) and Hunger Enough: Living Spiritually in a Consumer Society (2004), and in publications such as Ploughshares, The Connecticut Poetry Review, The Yalobusha Review, Kansas Quarterly, The Bloomsbury Review, Many Mountains Moving, The High Plains Literary Review, Cimarron Review, Southern Poetry Review, Southwest Review, and more. She is the recipient of numerous awards and fellowships and was named Distinguished Scholar (1993) for her literary achievements while a Professor of English at the University of Northern Colorado. Her books include Nesting Doll (UPC 1999), Trying on Faces (1995), and Unveiling (1993).