An American Woman in Revolutionary China 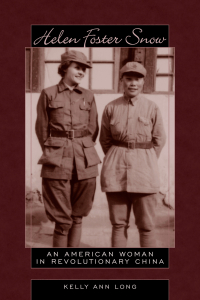 "Kelly Ann Long features Helen Snow's quest for journalistic recognition, sometimes as a partner in a dynamic marriage team contributing to good Chinese-American relations and sometimes in competition with her husband for fame and fortune. Long uses Helen Snow's writings to form a memoir, allowing insight into American and Chinese values, perspectives on women's roles, and a sympathetic feminine lens through which to view social reforms and political changes in 1930s China."
—Barbara Bennett Peterson, Journal of American History

"Long explores an essential issue: the cultural limitations imposed on anyone who attempts to interpret another culture."
—Diana Marston Wood, University of Pittsburg; Education about Asia

Helen Foster Snow: An American Woman in Revolutionary China tells the story of a remarkable woman born in rural Utah in 1907, who lived in China during the 1930's and became an important author, a lifelong humanitarian, and a bridge-builder between the United States and China.

As Kelly Ann Long recounts in this engaging biography, Helen Foster Snow immersed herself in the social and political currents of a nation in turmoil. After marrying renowned journalist Edgar Snow, she developed her own writing talents and offered an important perspective on emerging events in China as that nation was wracked by Japanese invasion, the outbreak of World War II, and a continuing civil war. She supported the December Ninth Movement of 1935, broke boundaries to enter communist Yenan in 1937, and helped initiate the "gung ho" Chinese Industrial Cooperative movement.

Helen Foster Snow wrote about the people and events in China's remote communist territories during an important era. She relayed detailed portraits of female communist leaders and famous figures such as Mao Zedong and Zhu De, as well as common people struggling to survive in a period of increasing turmoil. Her informed, compassionate depictions built a bridge linking American interest to the welfare of the Chinese.

Long's account recovers the story of a controversial and important commentator on a critical period in U.S.-China relations and in Chinese history.

Kelly Ann Long is an assistant professor of history at Colorado State University.