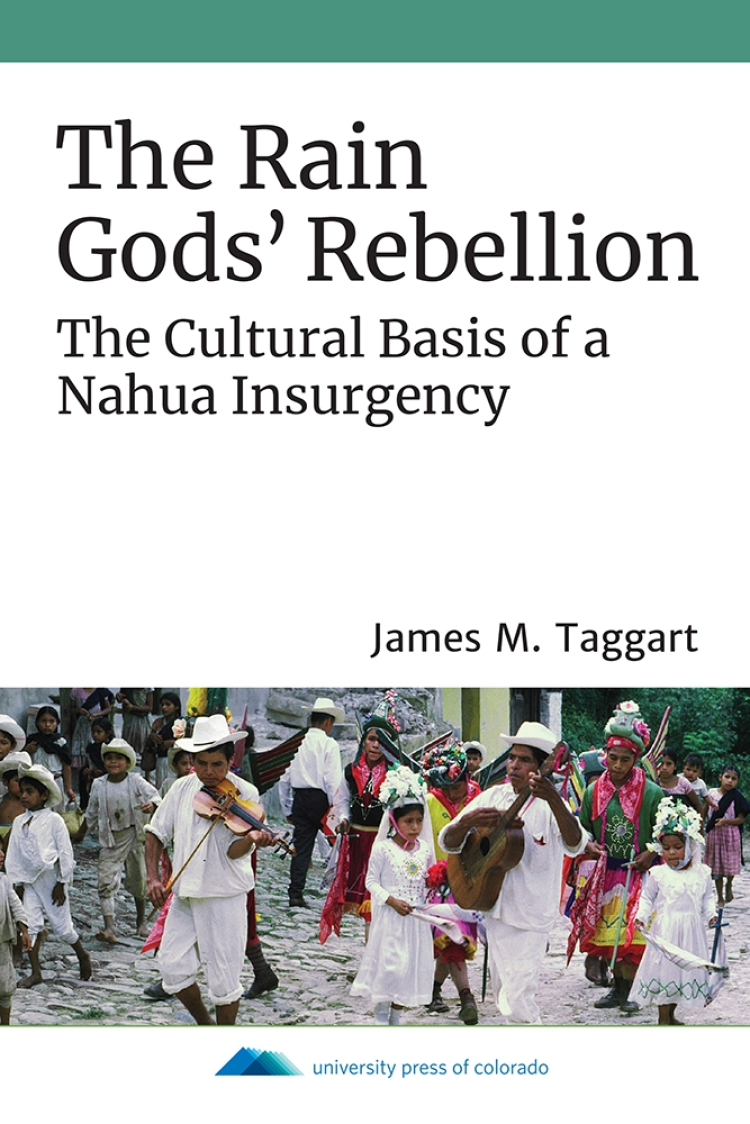 “The materials gathered and analyzed in this book are priceless—they present rare and expertly documented oral history of Nahuas in the Sierra Norte gathered over several decades. Relatively few scholars have had the kind of access and trust of a community in this region as is evident between the author and the Indigenous peoples who shared their collective memories and experiences. . . . A masterful and insightful interpretation of both structures and events occurring in the region through Nahua oral history.”
—Kelly McDonough, University of Texas at Austin

This book is freely available in digital formats as part of the Sustainable History Monograph Pilot thanks to a generous grant from the Andrew W. Mellon Foundation.

The Rain Gods’ Rebellion examines Nahua oral narratives to illuminate the cultural basis of the 1977–1984 rebellion against the local Hispanic elite in Huitzilan de Serdán, Mexico. Drawing from forty years of fieldwork in the region, James M. Taggart traces the sociopolitical role of Nahua rain gods—who took both human and divine forms—back hundreds of years and sheds new light on the connections between social experiences and the Nahua understanding of water and weather in stories. As Taggart shows, Nahua tales of the rain gods’ rebellion anticipated the actual 1977 land invasion in Huitzilan, in which some 200–300 Nahua were killed.

The Rain Gods’ Rebellion reveals how local culture evolves from the expression of unrest to organized insurgency and then into collective memory. Taggart records a tradition of storytelling in which Nahuas radicalized themselves through recounting the rain gods’ stories—stories of the gods organizing and striking with bolts of lightning the companion spirits of autocratic local leaders who worked closely with mestizos. The tales are part of a tradition of resisting the friars’ efforts to convert the Nahuas, Totonacs, Otomi, and Tepehua to Christianity and inspiring nativistic movements against invading settlers.

Providing a rare longitudinal look at the cultural basis of this grassroots insurgency, The Rain Gods’ Rebellion offers rare insight into the significance of oral history in forming Nahua collective memory and, by extension, culture. It will be of significance to scholars of Indigenous studies, anthropology, oral history, and violence studies, as well as linguistic anthropologists and sociolinguists.

James M. Taggart is the Lewis Audenreid Professor of History and Archaeology, Emeritus, at Franklin and Marshall College and taught for five years at the Escuela Nacional de Antropología e Historia in Mexico City. His fieldwork in Mexico, Spain, and the Hispanic Southwest has been supported by grants from the Mellon Foundation, the National Science Foundation, the American Philosophical Society, and the Lewis Audenreid Fund of Franklin and Marshall College. He is the author of Remembering Victoria: A Tragic Nahuat Love Story and recipient of the Bradley R. Dewey Prize for Excellence in Scholarship, the Christian R. and Mary F. Lindback Prize for Excellence in Teaching, and an honorable mention in the Chicago Folklore Prize competition.