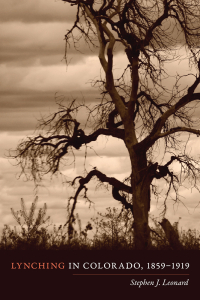 "Stephen J. Leonard shows that lynching is a central part of the heritage of the state, the West, and the nation, a part of our struggle to define our civilization and our ideals. Here is a book the people of Colorado, the West, and America will want to and should read."
—James H. Madison, Indiana University

"Steve Leonard, one of Colorado's most eloquent, expert, and experienced historians, captures in chilling detail the story of Judge Lynch. . . . [A] definitive look into Colorado's closet at a most notorious skeleton."
—Thomas J. Noel, University of Colorado, Denver

In this examination of more than 175 lynchings, Stephen J. Leonard illustrates the role economics, migration, race, and gender played in the shaping of justice and injustice in Colorado. One of the first comprehensive studies of the phenomenon in a Western state, Lynching in Colorado provides an essential complement to recent studies of Southern lynchings, demonstrating that at times the land of purple mountain's majesty was just as lynching-prone as was the land of Dixie. Written for general fans of Western history as well as scholars of American culture, Lynching in Colorado shows Westerners at their worst and their best as they struggled to define law and order.

Stephen J. Leonard is professor and chair of the Department of History at Metropolitan State College.