The Romance of Commerce and Culture

Capitalism, Modernism, and the Chicago-Aspen Crusade for Cultural Reform 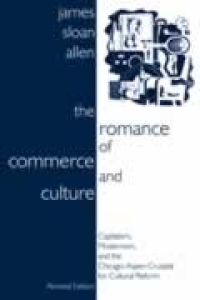 Buy Now
Copyright Clearance Center
Member Institution Access
"One of the most significant pieces of cultural history to be published in the last decade."

"In Allen's quite detailed, although always urbane, intelligent, and well-written book, we have an unusual and exceptionally suggestive perspective on the American upper class and its culture."
—American Historical Review

"Rarely does a historian evoke the mood of an era as convincingly as James Sloan Allen in this portrayal of the relationship between business and 'high culture' in the years immediately after World War II. . . . Not only has Allen produced a model of interdisciplinary scholarship, but in doing so he also has rescued from obscurity a significant intellectual and social movement - one whose failure speaks volumes about the final years of the twentieth century."
—Journal of American History

"In this tour de force, Allen manages to touch on such seemingly disparate topics as Bauhaus design, educational reform at the University of Chicago, Aristotelian philosophy, and the growth of skiing in the United States."
—Business History Review

Revised and updated, The Romance of Commerce and Culture is a lively and provocative history of how art and intellect formed an alliance with consumer capitalism in the mid-twentieth century and put Aspen, Colorado, on the map.

James Sloan Allen has written widely on many subjects ranging from European thought and American society to Hindu and Islamic cultures, from ancient philosophy to modernist design. With a doctorate in European intellectual history from Columbia University, he has taught at several institutions, including Columbia, Haverford College, Brigham Young University, the New School, and the Juilliard School, where he was academic vice president. He continues to teach a Great Books class for adults in New York City but resides in Hawai'i.