The Ballad of Baby Doe

"I Shall Walk Beside My Love"

by Duane A. Smith, with John Moriarty 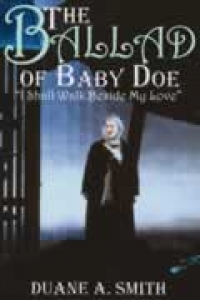 "In his usual lively style, Smith marks the historical cornerstones of the gold rush era and Colorado's silver fever in the 19th century."
—Durango Herald

"This is a lovely little book, a cross between an ode and a work of history."
—Colorado Libraries

"I can't think of a more qualified duo to author a book such as this. It is a pioneering work."

First produced at the Central City Opera House in 1956, "The Ballad of Baby Doe" is now widely considered a classic and is the second most produced American opera. In The Ballad of Baby Doe, Duane A. Smith tells the tale of the complicated birth of this most American of operas. Inspired in 1953 by composer Douglas Moore's interest in Horace Tabor's story and funded by the Central City Opera House Association, the opera came together through a unique combination of hard work and serendipity. Smith relates how key people—including investors and historians in addition to creative talent—turned Moore's idea into a reality and brought the story of the Tabors to millions of opera fans worldwide. In addition, Smith compares the opera's libretto with historical reality, and the book even includes a chapter on the production written by John Moriarty, who conducted the opera in 1981, 1988, and 1996.

For anyone interested in opera history or this Colorado story in particular—the emblematic tale of silver millionaire Horace Tabor and the two women he married—The Ballad of Baby Doe will be the definitive history for years to come.

John Moriarty is the artistic director emeritus of the Central City Opera House Association. He conducted "The Ballad of Baby Doe" there most recently in 1996.