How We Learned to Stop Worrying and Love the Bomb

edited by Michael A. Amundson and Scott C. Zeman 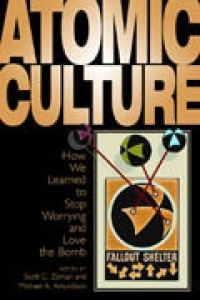 "Atomic Culture points to one inescapable conclusion: For all the trappings of nostalgia and the distancing mechanisms by which we seek to relegate it to 'history,' the atomic age is not merely a part of our past."
—Bulletin of the Atomic Scientists

"A broad range of topics are deftly covered. . . I have written a fair amount of marginalia; and I have learned a lot about unfamiliar subjects—good seat-of-the-pants reasons to recommend this anthology to others."
—The Journal of American History

"Atomic Culture demonstrates the rich field of subjects available in the history of the bomb . . . [and] offers new ideas and understandings of the continual influence of the atom on American life."
—Western Historical Quarterly

In Atomic Culture, eight scholars examine the range of cultural expressions of atomic energy from the 1940s to the early twenty-first century, including comic books, nuclear landscapes, mushroom-cloud postcards, the Los Alamos suburbs, uranium-themed board games, future atomic waste facilities, and atomic-themed films such as Dr. Strangelove and The Atomic Kid.

Despite the growing interest in atomic culture and history, the body of relevant scholarship is relatively sparse. Atomic Culture opens new doors into the field by providing a substantive, engaging, and historically based consideration of the topic that will appeal to students and scholars of the Atomic Age as well as general readers.

Michael A. Amundson is a professor of history at Northern Arizona University, the author of Yellowcake Towns, Passage to Wonderland, and Wyoming Revisited, and the co-editor of Atomic Culture.