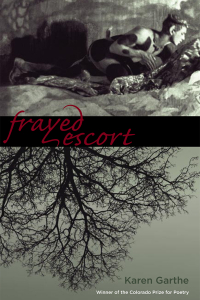 Winner of the 2006 Colorado Prize for Poetry

"In these poets, avant-garde modernism is alive, greased, agile, on the prowl, unapologetic. . . . Here is an art that replaces the "I" with new figures and intensities. All the same, it recognizes the individual as the source of revolt. Gone is the precious air of the auratic; a sort of dauntless and sweet impertinence . . . takes its place. With poets like . . . Garthe, poetry has more than a fair chance of surviving its predicaments with a display of brilliant agility and aplomb, a chance to hold, as Celan said, its ground on its own margin."
—Chicago Review

"Evading every opportunity to be obvious and tedious, [Garthe's] poetry somehow skips beyond even the need to be subtle: it is simply unimaginably imaginative at every point. The writing is at once lean and fantastic, crisp and mobile. All but exclusively, it exhibits, rather than thematizes, freedom—light-footed, dance-footed, sure-footed freedom."
—Cal Bedient, author of The Violence of the Morning and Candy Necklace

"Everything in Frayed escort resists the normative; the poems catapult the reader into an off-kilter arena of sensations. Karen Garthe's terrific feat is in giving us deep feeling by way of the particularities: these poems of great empathy bring dread, suspicion, lament, disdain, and generosity to the fore in our reading of them. A struggle with faith, disbelief, sacrifice, and terrible disaster haunts the collection from its opening image of a plane-crash victim stuck in a tree through myriad snows (ash) and key Egyptian, Roman Catholic, and Buddhist figures. This is a wholly unique book."
—Susan Wheeler, author of Record Palace and Ledger