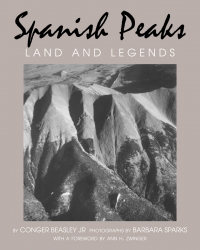 "In a happy marriage of crystalline prose and expressive photography, Spanish Peaks addresses the geology of these mysterious twin peaks and includes ancient American Indian legends, a history of exploration and settlement, and portraits of area towns and key people."
—Rocky Mountain News

"Incorporating discussions of customs, legends, ruins, churches, public buildings, cemeteries, and more, [the authors] demonstrate how the psyche of current inhabitants has been affected by interactions of the natural environment and their historical, religious, and cultural traditions. The book is a joy to read."
—Journal of the West

The Spanish Peaks stand alone some distance from the main cordillera of the Sangre de Cristo Mountains, south of Pueblo, Colorado. The towering twin mountains have served as beacons for Native Americans, Spaniards, trappers, traders, travelers on the Santa Fe trail, miners, and homesteaders. Spanish Peaks shares the legends the mountains have inspired and tells of the peoples drawn to the peaks' shelter. Author Conger Beasley, Jr. and photographer Barbara Sparks portray the people who struggle to sustain their lives here and document traditional events such as the Ute Bear Dance and Holy Week among the penitentes of Huerfano Church. Beasley's vivid writing and Sparks's photographs offer tribute to a rugged, mysterious place.

Conger Beasley, Jr. is the author of many award-winning books and guidebooks.

Photographer Barbara Sparks has collaborated on previous books with Tom Wolf and Ann Zwinger; her photographs are collected in several museums.