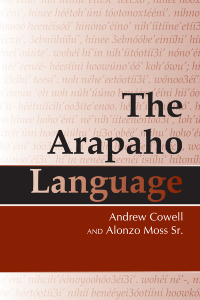 "The combined efforts of Andrew Cowell and Alonzo Moss have not only produced a very important work on the Arapaho Language, but also a work that may be the most comprehensive grammatical analysis of Arapaho in print. While the book will be of substantial interest to linguists studying Algonquin languages, particularly those spoken in the plains, Cowell and Moss have put together a work that can also be useful for students hoping to learn Arapaho."
—Neyooxt Greymorning, Great Plains Research

The Arapaho Language is the definitive reference grammar of an endangered Algonquian language. Arapaho differs strikingly from other Algonquian languages, making it particularly relevant to the study of historical linguistics and the evolution of grammar. Andrew Cowell and Alonzo Moss, Sr. document Arapaho's interesting features, including a pitch-based accent system with no exact Algonquian parallels, radical innovations in the verb system, and complex contrasts between affirmative and non-affirmative statements.

Cowell and Moss detail strategies used by speakers of this highly polysynthetic language to form complex words and illustrate how word formation interacts with information structure. They discuss word order and discourse-level features, treat the special features of formal discourse style and traditional narratives, and list gender-specific particles, which are widely used in conversation. Appendices include full sets of inflections for a variety of verbs.

Arapaho is spoken primarily in Wyoming, with a few speakers in Oklahoma. The corpus used in The Arapaho Language spans more than a century of documentation, including multiple speakers from Wyoming and Oklahoma, with emphasis on recent recordings from Wyoming. The book cites approximately 2,000 language examples drawn largely from natural discourse—either recorded spoken language or texts written by native speakers.

With The Arapaho Language, Cowell and Moss have produced a comprehensive document of a language that, in its departures from its nearest linguistic neighbors, sheds light on the evolution of grammar.

Andrew Cowell is a professor of linguistics at the University of Colorado.

Alonzo Moss Sr. is a native speaker of Arapaho from Wyoming who has worked extensively to teach and document the language on the Wind River Reservation.