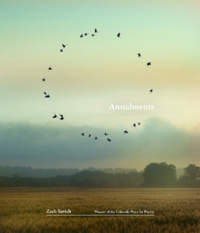 Winner of the 2010 Colorado Prize for Poetry

"Winner of the 2010 Colorado Prize, this sophomore collection from Savich (Full Catastrophe Living) features poems that communicate what is fragmentary at the expense of the concrete. At once meticulous and vertiginous, these poems are grounded by 'The Mountains Overhead,' a long poem of 113 fragments, in which we find 'Dawn stripping you like a cat/ clawing a band of wallpaper' and horses that 'hold themselves like torches so they/ won't burn like themselves.' The result is a collection that is thrilling and inchoate. 'A Children's Story' is Savich at his best, blending enjambment and narrative to create a poem in which the speaker's distance from the memory of a former love ('the white/ in her teeth and eyes moved him like childhood/ loss') is realized with melancholy. In keeping with the trope of annulments, the poems often end suddenly, leaving much to be desired in their genesis and construction. One senses that Savich could go on building his fragmentary mountain forever, not unlike a certain well-known biblical tower whose result was the fragmentation of language itself, all the while longing for a 'heart which exists/ in which to continue is not/ to confine.' (Nov.)"
—Danniel Schoonebeek, Publishers Weekly

"It is the poet who, undistracted by the imbecile telegraphy of this moment, dares to sustain a sustaining sound I most esteem and most warmly embrace. Zach Savich has written a book both intimate and vast, both tender and acidly candid. And with his long poem, 'The Mountains Overhead,' he has entered that visionary company of poets who, by overturning Babel, lay the heavens at our feet."
—Donald Revell

"Sparse, spare, these lines nonetheless overflow with a sheer and brilliant imagination—'The crows: hearing our voices through wires'; 'the horses hold themselves like torches'; 'the sun a dial tone . . .' The tension between minimalism of form and maximalism of concept and feeling gives this work a vivid, oddly crystalline, momentum. The central long poem unfolds one small leaf at a time, yet resists accumulation; instead it presents us again and again with the opportunity to immerse ourselves in the slightly uncanny: what would it be to sing instead of to say? This book gives us an intimation."
—Cole Swensen

Zach Savich's first book, Full Catastrophe Living, won the 2008 Iowa Poetry Prize and received a New American Poet honor from the Poetry Society of America. His poems, essays, and book reviews have appeared in many journals, including Boston Review, Kenyon Review, A Public Space, Denver Quarterly, and Pleiades. A recipient of a BA from the University of Washington and an MFA from the University of Iowa Writers' Workshop, Savich has lived and taught in Italy, France, New Zealand, and the United States. He currently teaches and studies at the University of Massachusetts Amherst, where he helps organize the Jubilat/Jones Reading Series.