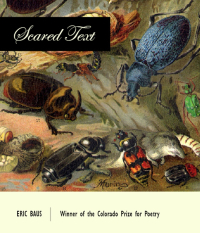 Winner of the 2011 Colorado Prize for Poetry

"Marvelously sustained and densely rhythmic, this tightly constructed whole is built of parts that, at each level, all the way down to the phrase, constitute poems in themselves. Baus manages to keep a cast of words in constant replay until many of them take on the presence of character, and some emerge as characters themselves—Minus and Iris, for instance-keeping the whole on the verge of a narrative project that remains always just barely out of reach, just barely in another world in which language and animal endlessly interleave. Baus has opened a new literary field: the linguistic bestiary, a new zoo where words pace like fauves behind ever-thinning bars."
—Cole Swensen, contest judge and author of Greensward, Ours, and The Glass Age

Eric Baus was born in Fort Wayne, Indiana, in 1975. His books include Tuned Droves (Octopus Books), The To Sound (Verse Press/Wave Books, Winner of the 2002 Verse Press, selected by Forrest Gander), and several chapbooks. He currently lives in Denver.