Politics, Labor, and the War on Big Business 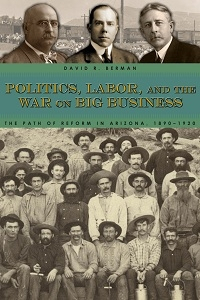 "A fascinating study about progressivism in Arizona between 1890 and 1920 through the lives of several key Arizona politicians and the programs and policies they implemented. . . . Politics, Labor, and the War on Big Business thus makes a significant contribution to our understanding of the Progressive Era and the role of the West in it."
—Carl Hallberg, Annals of Wyoming

Politics, Labor, and the War on Big Business details the rise, fall, and impact of the anticorporate reform effort in Arizona during the Progressive reform era, roughly 1890-1920. Drawing on previously unexamined archival files and building on research presented in his previous books, author David R. Berman offers a fresh look at Progressive heritage and the history of industrial relations during Arizona's formative period.

In the 1890s, once-heavily courted corporations had become, in the eyes of many, outside "money interests" or "beasts" that exploited the wealth of the sparsely settled area. Arizona's anticorporate reformers condemned the giant corporations for mistreating workers, farmers, ranchers, and small-business people and for corrupting the political system. During a 30-year struggle, Arizona reformers called for changes to ward off corporate control of the political system, increase corporate taxation and regulation, and protect and promote the interests of working people.

Politics, Labor and the War on Big Business places Arizona's experience in the larger historical discussion of reform activity of the period, considering issues involving the role of government in the economy and the possibility of reform, topics highly relevant to current debates.