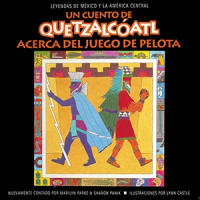 Quetzalcóatl tales are ancient legends from Mexico and Central America that have been passed down through the ages, primarily by oral tradition. The Quetzalcóatl Tales Series, aimed at K-5 students, particularly in first and fifth grade, introduces young children to these wonderful stories with their sensitive portrayal of this rich and significant culture. These vividly illustrated texts are available in English and Spanish and are accompanied by teacher's guides that provide the archaeological and historical background of each story, as well as a wide range of engaging and educational activities for students.