Epiphany in the Wilderness

Hunting, Nature, and Performance in the Nineteenth-Century American West 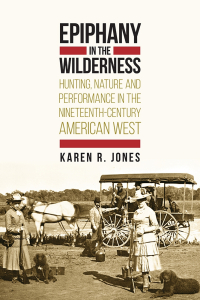 "As a measure of hunting’s power, Jones deftly offers a sophisticated account of hunting and its evocation by women and Indigenous peoples to challenge the fraternity of white male hunters and the power they wielded. Her compelling examples and anecdotes artfully illustrate her arguments, and her facilities as an imaginative historian are everywhere evident. . . . Highly recommended."

"[Epiphany in the Wilderness] makes a compelling case for hunting's significance and thus stands as an original contribution to the cultural and environmental history of the West."

​"[​Epiphany in the Wilderness​]​ provides a rich and​ ​detailed narrative that illuminates the significance of the hunt​ ​in the nineteenth-century American West and offers a meaningful​ ​contribution to western studies.​"​

​"[A​] ​rich account of the complex ways that hunting constituted a theater where women and men could craft for themselves diverse social identities. . . . we are still living with the legacies of these diverse hunting performances, and Epiphany in the Wilderness offers readers a broad and provocative foundation for historical reflection."
—Western Historical Quarterly

​"[A] well-conceived, wide-ranging reexamination of hunting in the American West, executed with wit and lively writing."

"The many-faceted inquiries of Jones’ work will provide grist for discussion for many years to come."

"[Karen Jones] calls forth a refreshingly diverse cast of characters, processes, and perspectives in this ambitious book. . . . Jones's characterizations of early western women, both well-known and obscure, are rich in detail and effectively disrupt any visions of a uniformly masculine American frontier."

"[A] valuable addition to our understanding of nineteenth-century western history and literature. . . . This kind of creative thinking should stimulate classroom discussions."

“This book offers an important scholarly layer to existing works on hunting, masculinity, and imperialism and the West in national mythology.”
​―Pacific Historical Review

Whether fulfilling subsistence needs or featured in stories of grand adventure, hunting loomed large in the material and the imagined landscape of the nineteenth-century West. Epiphany in the Wilderness explores the social, political, economic, and environmental dynamics of hunting on the frontier in three “acts,” using performance as a trail guide and focusing on the production of a “cultural ecology of the chase” in literature, art, photography, and taxidermy.

Using the metaphor of the theater, Jones argues that the West was a crucial stage that framed the performance of the American character as an independent, resourceful, resilient, and rugged individual. The leading actor was the all-conquering masculine hunter hero, the sharpshooting man of the wilderness who tamed and claimed the West with each provident step. Women were also a significant part of the story, treading the game trails as plucky adventurers and resilient homesteaders and acting out their exploits in autobiographical accounts and stage shows.

Epiphany in the Wilderness informs various academic debates surrounding the frontier period, including the construction of nature as a site of personal challenge, gun culture, gender adaptations and the crafting of the masculine wilderness hero figure, wildlife management and consumption, memorializing and trophy-taking, and the juxtaposition of a closing frontier with an emerging conservation movement.

The University Press of Colorado gratefully acknowledges the generous support of the Charles Redd Center for Western Studies at Brigham Young University toward the publication of this book.

Karen R. Jones is a historian of the American West with particular interests in nineteenth-century cultural and environmental history. Her books include Wolf Mountains: The History of Wolves along the Great Divide, The Invention of the Park, and The American West: Competing Visions. She was awarded the James H. Bradley Fellowship at the Montana Historical Society for her research on hunting and conservation in late nineteenth-century Montana and has earned fellowships at the Autry National Center and the Buffalo Bill Historical Center for projects on horses and war in the nineteenth century and on taxidermy and the “afterlife” of hunted animals.