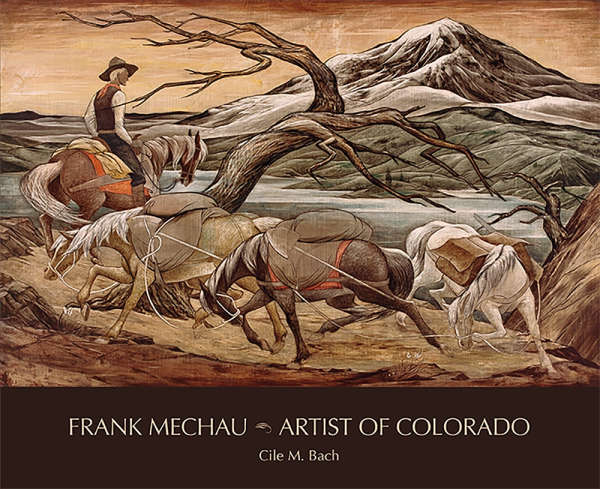 "Influenced improbably by the swirling attenuations of Aubrey Beardsley and stolid classicism of Piero della Francesca, the great American artist Frank Mechau developed his own distinctive visual language to capture the wild west he knew so well. This new edition of the 1981 monograph by the late Cile Bach is most welcome. Its informative text, full-color reproductions, and touching introductory tribute by family members do much to celebrate the reputation of this all-too-often neglected master."

"[A] beautifully designed book, showcasing the talents of one of Colorado’s great artists, whose work still feels fresh and vibrant these decades later."

"This book represents the broad range of Mechau’s works during his short but productive career. It draws not only from the art itself, but also letters, notes, personal photographs, and journals that not only give the reader a sense of his artistic process, but of the life that inspired so much of his work. . . . This new edition is generously illustrated with color images of Mechau’s murals, paintings, and other works which have rarely been published. It also includes a catalog of his works. The book is highly recommended to readers who will relish Mechau’s western art and learn about the man who captured the spirit of the Great Plains."

"The richness of [Mechau's] experience and its influence on his artwork is wonderfully displayed in the narrative and layout of the book. Although he is best known for his portrayals of the American West, he also chronicled the Caribbean region and Panama for the War Department during World War II. His paintings, letters and photographs of this time are included in the book, and it is stunning how this deeply affecting time in his life comes through in his paintings."
—Grand Junction Daily Sentinel

"This book presents a compelling case for greater recognition of a powerful talent."

There are stories scattered throughout human history of rare individuals of remarkable talent, energy, and promise whose lives are unexpectedly and tragically cut short. Artist Frank Mechau was one of these. His artistic career spanned only twenty years—1926 to 1946—but in the course of those years he produced paintings, murals, and drawings of exceptional potency and poignancy. His work shows influences of the masters he studied—European, Japanese, and Chinese—from whom he developed his own aesthetic of line, design, and composition that, in a singular way, speaks to broader artistic truths.

In Frank Mechau: Artist of Colorado, Cile Bach offers a thoughtful and engaging account of Mechau’s career. Using excerpts from letters, notes, and journals, she infuses the book with Mechau’s presence, giving readers not only a sense of the strength of his artistic talent but a glimpse of the extraordinary self-educated man behind the work—his determination, his sharp mind, his playful wit, his gentleness, and his love of life, his family, and the Western Slope of Colorado that was his home.

Cile Bach’s account remains the only substantial documentation to date of Mechau’s career—which makes this second edition of Frank Mechau: Artist of Colorado a prized and important book. Its publication marks the thrity fifth anniversary of the book’s first appearance in 1981, when it accompanied a Frank Mechau exhibition at the Aspen Center for the Visual Arts. Happily, the new edition will make its debut at the Colorado Springs Fine Arts Center’s Legacy Series Exhibit featuring Frank Mechau, scheduled from March 4 to May 15, 2016.

Cile M. Bach (1910–1991) was the longtime director of the Denver Art Museum’s publication department, responsible for producing its quarterly journal and many diverse publications. She won distinction as a researcher and writer, authoring or collaborating on books on art and history, among them Art, a Mirror of Man; Literary Culture and American Imperialism; Images of History; and a range of works on American Indian culture.