Collecting on the Edge 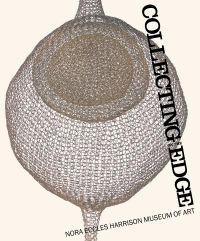 Published by the Nora Eccles Harrison Museum of Art

“A fierce demonstration of how university museums and galleries can and should play crucial roles as provocateurs in conversations about art. The result of this open-range approach is a compelling engagement in which the affecting and aesthetic power of art repudiates the critical conventions that would contain it. . . .Summing up: Recommended.”
—CHOICE

Modern and contemporary art created in the American West, manifesting an independent spirit and embodying unique ideas, has been largely written out of the mainstream narrative of art history or placed in unhelpful contexts. Collecting on the Edge, featuring work by 170 such artists from the collection of the Nora Eccles Harrison Museum of Art in Logan, Utah, aims to correct that situation. The text that accompanies each image—written by seventy-five critics, art historians, curators, gallerists, artists, and collectors—provides insight into the works and their creators.

In an introductory essay art critic Michael Duncan exposes the provincialism and regionalist thinking that has dictated mainstream views of modernism: “Many of the nation’s most daring, innovative, and iconoclastic works have been ignored . . . simply because they were made on the wrong side of the Mississippi.” This extensive catalogue also includes a substantial interview with visionary collector George Wanlass, who amassed these works over a thirty-year period, providing a rare glimpse of his philosophy and practice.

An inclusive rewriting of the traditional narrative with new perspectives on artists both familiar and unfamiliar, Collecting on the Edge is a must-have resource featuring material unavailable online or through any other publication.

Bolton Colburn is a museum professional and has previously served as the Executive Director of the Surfing Heritage Foundation (2012–2013), Director of the Laguna Art Museum (1996–2011), and Senior Curator for both the Laguna Art Museum (1987–1995) and the Orange County Museum of Art (1996). He is currently the Supervisor of Heroes Hall, a new museum focused on the stories of our veterans that opened in February 2017. His publications and exhibitions on art and culture include Kustom Kulture: Von Dutch, Ed “Big Daddy” Roth, Robert Williams and Others, Across the Street: Self-Help Graphics and Chicano Art in Los Angeles, Surf Culture: The Art History of Surfing, In the Land of Retinal Delights: The Juxtapoz Factor, In Nature’s Temple: The Art and Life of William Wendt, and Best Kept Secret: UCI and the Development of Contemporary Art in Southern California.