Hidden Out in the Open 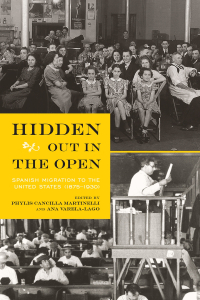 “An excellent collection of essays that promises to inaugurate a new field of history/immigration/diaspora studies, focusing on the little-known history of working-class Spaniards who came to the US by the tens of thousands in the late nineteenth and early twentieth centuries.”
—James D. Fernández, New York University

“This edited volume rigorously documents and vividly recounts the astonishing range of migrant experiences of modern Spaniards in the United States. Given the relative scarcity of material on this migration, the volume will undoubtedly provide ground-breaking insight in to the history of modern America.”
—María Montserrat Feu-López, Sam Houston State University

"In this important contribution to the history of immigration to the United States, editors Phylis Cancilla Martinelli and Ana Varela-Lago present a fascinating and accessible collection of essays accompanied by informative graphics and engaging photos."
—Hispania

Hidden Out in the Open is the first English-language volume on Spanish migration to the United States in the late nineteenth and early twentieth centuries. This panoramic study covers a period defined by the crucial transformations of the Progressive Era in the United States, and by similarly momentous changes in Spain following the Restoration of the Bourbon monarchy under Alfonso XII.

The chapters in this volume are geographically wide-ranging, reflecting the transnational nature of the Spanish diaspora in the Americas, encompassing networks that connected Spain, Cuba, Latin American countries, the United States, and American-controlled territories in Hawai’i and Panama. The geographic diversity reveals the different jobs immigrants engaged in, from construction gangs in the Panama Canal to mining crews in Arizona and West Virginia. Contributors analyze the Spanish experience in the United States from a variety of perspectives, discussing rural and urban enclaves, the role of the state, and the political mobilization of migrants, using a range of methodological approaches that examine ethnicity, race, gender, and cultural practices through the lenses of sociology, history, and cultural studies.

The mention of the Spanish influence in the United States often conjures up images of conquistadores and padres of old. Forgotten in this account are the Spanish immigrants who reached American shores in the late nineteenth and early twentieth centuries. Hidden Out in the Open reveals the role of the modern migration of Spaniards in this "land of immigrants" and rectifies the erasure of Spain in the American narrative. The book will be of interest to scholars and students of US history and the history of modern Spain and Europe, as well as those interested in ethnic and migration/diaspora studies, Hispanic/Latino studies, and the study of working class and radicalism.

Phylis Cancilla Martinelli is professor emerita at St. Mary’s College (Moraga, California), where she taught Sociology and Collegiate Seminar for twenty-five years. She has published extensively on the topic of ethnic identity and is the author of Undermining Race: Ethnic Identities in Arizona Copper Camps, 1880–1920.

Ana Varela-Lago is Senior Lecturer in the History Department at Northern Arizona University. Her research on the Spanish diaspora in the United States focuses on transnational spaces and the interplay of migration, imperialism, nationalism, and class and ethnic identity.