Dean Young is the author of two previous books of poetry, Design With X and Beloved Infidel, both from Wesleyan. He has received fellowships from Guggenheim, the National Endowment for the Arts, Stanford University, and the Fine Arts Work Center in Provincetown. His poems have appeared in a wide variety of national magazines and in 1993 and 1994 won inclusion in The Best American Poetry anthology. He was named the William Livingston Chair of Poetry at the University of Texas at Austin in 2008, and has published three books since Strike Anywhere: First Course in Turbulence, Skid, and Elegy on Toy Piano. 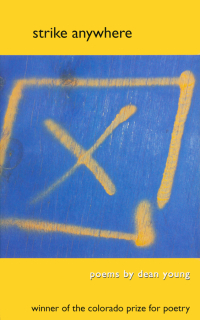