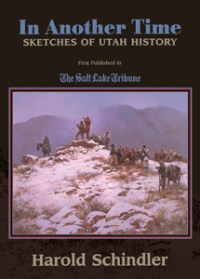 An illustrated collection of historical articles originally published in the Salt Lake Tribune from 1993 to 1996, In Another Time provides both an entertaining introduction to Utah and a distinguished and popular historian's summary views of the state's peculiar history. Harold Schindler is well known to readers of the Tribune as a columnist and feature writer. He is also widely respected as a historian and author, especially of the popular biography Orrin Porter Rockwell: Man of God, Son of Thunder.

The essays published here come from two series he wrote for the Tribune, and they include some of the longest feature articles ever printed in that paper. Schindler prepared one series in conjunction with Utah's 1996 statehood centennial, giving readers a dramatic and kaleidoscopic overview of Utah history. During the same period and earlier, the Tribune also ran many of Schindler's more focused sketches of specific historical figures, events, and topics. Interspersed in the book with the overview articles, these pieces recount some of the more picturesque tales from Utah's colorful past. Both formats demonstrate the wide range of the author's knowledge of little- and well-known threads in Utah's story. Schindler shows again and again, with vibrant images of the past, why readers of the Tribune and of his books have come to admire his skills as a writer. In Another Time will entertain and inform newcomers seeking an introductory understanding of what has made Utah different, old hands wanting to know more about the rich complexity of the state's past, and anyone who enjoys well-told historical tales.

Harold Schindler was an American journalist and historian, known for his articles and books on the American West. He wrote and reported for the Salt Lake Tribune for 50 years.