Out of the Black Patch

edited by Noel A. Carmack and Karen Lynn Davidson 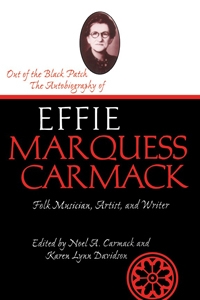 Effie Marquess Carmack (1885-1974) grew up in the tobacco-growing region of southern Kentucky known as the Black Patch. As an adult she moved to Utah, back to Kentucky, to Arizona, and finally to California. Economic necessity primarily motivated Effie and her husband's moves, but her conversion to the Mormon Church in youth also was a factor. Throughout her life, she was committed to preserving the rural, southern folkways she had experienced as a child. She and other members of her family were folk musicians, at times professionally, and she also became a folk poet and artist, teaching herself to paint. In the 1940s, she began writing her autobiography and eventually also completed a verse adaptation of it and an unpublished novel about life in the Black Patch.

Much of Effie's story is a charming memoir of her vibrant childhood on a poor tobacco farm. She describes a wide variety of folk practices, from healing and crafts to children's games. Her family's life included the backbreaking labor and economic trials of raising tobacco, but it was enriched by a deep familial heritage, communal music, creative play, and traditional activities of many kinds. After the family converted to the Mormon Church, religious study and devotion became another important dimension. Effie's account of Mormon missions contributes to the little-known record of Latter-day Saint attempts to establish a presence in the South.

After marrying, the Carmacks moved west, eventually landing in the Arizona desert, where Effie took up painting in earnest. Her art began to attract modest attention, which brought exhibits, awards, and a new career teaching others what she had taught herself. After the Carmacks later retired to Atascadero, California, Effie became a more active and public folk singer as well.

Karen Lynn Davidson is on the English faculty at Mayfield Senior School and has taught in the English department of Brigham Young University. She was awarded the 2010 Best Documentary Editing/Bibliography Book Award from the Mormon History Association.