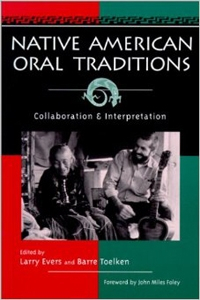 This collection provides a benchmark that helps secure the position of collaboration between Native American and non-Native American scholars in the forefront of study of Native oral traditions. Seven sets of intercultural authors present Native American oral texts with commentary, exploring dimensions of perspective, discovery, and meaning that emerge through collaborative translation and interpretation. The texts studied all come from the American West but include a rich variety.

This presentation of jointly authored work is timely: it addresses increasing interest in and calls for movement toward reflexivity in the relationships between scholars and the Native communities they study, and it responds to the renewed commitment in those communities to asserting more control over representations of their traditions. Although Native and academic communities have long tried to work together in the study of culture and literature, the relationship has been awkward and imbalanced toward the academics. In many cases, the contributions of Native assistants, informants, translators, and field workers to the work of professional ethnographers has been inadequately credited, ignored, or only recently uncovered. Native Americans usually have not participated in planning and writing such projects. Native American Oral Traditions provides models for overcoming such obstacles to interpreting and understanding Native oral literature.

Larry Evers is Department Head of English at the University of Arizona and holds a joint appointment with American Indian Studies.