Disaster at the Colorado 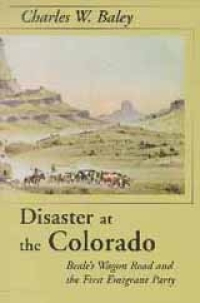 Buy Now
Copyright Clearance Center
Member Institution Access
"This is a good book, worthy to join a host of other western trails studies. . . . The work, largely narrative, is based on many primary sources and, equally important, it is readable. The armchair explorer will be satisfied, and there is enough trail topography for 'ruts nuts' and 'in the dirt' students. It is apparent that the author followed much of the trail himself and presents a good sense of place, putting the reader in the picture."

"This volume is based on thorough scholarship and diligent research. . . . Anyone with interests in trail history will enjoy this book as a welcome addition to their library."

Across north-central New Mexico and Arizona, along the line of Route 66, now Interstate 40, there first ran a little-known wagon trail called Beale's Wagon Road, after Edward F. Beale, who surveyed it for the War Department in 1857. This survey became famous for employing camels. Not so well known is the fate of the first emigrants who the next year attempted to follow its tracks. The government considered the 1857 exploration a success and the road it opened a promising alternative route to California but expected such things as military posts and developed water supplies to be needed before it was ready for regular travel. Army representatives in New Mexico were more enthusiastic.

In 1858 there was a need for an alternative. Emigrants avoided the main California Trail because of a U.S. Army expedition to subdue Mormons in Utah. The Southern Route ran through Apache territory, was difficult for the army to guard, and was long. When a party of Missouri and Iowa emigrants known as the Rose-Baley wagon train arrived in Albuquerque, they were encouraged to be the first to try the new Beale road. Their journey became a rolling disaster. Beale's trail was more difficult to follow than expected; water sources and feed for livestock harder to find. Indians along the way had been described as peaceful, but the Hualapais persistently harassed the emigrants and shot their stock, and when the wagon train finally reached the Colorado River, a large party of Mojaves attacked them. Several of the emigrants were killed, and the remainder began a difficult retreat to Albuquerque. Their flight, with wounded companions and reduced supplies, became ever more arduous. Along the way they met other emigrant parties and convinced them to join the increasingly disorderly and distressed return journey.

Charles Baley tells this dramatic story and discusses its aftermath, for the emigrants, for Beale's Wagon Road, and for the Mojaves, against whom some of the emigrants pressed legal claims with the federal government.