Leave the Dishes in the Sink

Adventures of an Activist in Conservative Utah 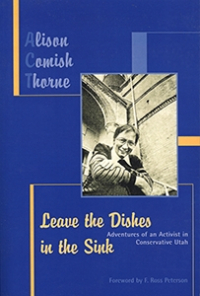 Alison Thorne provides a small-town Utah perspective on the progressive social movements that in the mid to late twentieth century dramatically affected American society. A born activist, Thorne has fought for women's rights, educational reform in public schools and universities, the environment, peace, and the war on poverty. Her efforts have been all the more challenging because of the conservative social and cultural environment in which she has undertaken them. Yet Thorne, who has deep personal and familial roots in the politically conservative and predominantly Mormon culture of Utah and much of the West, has worked well with people with varied political and social perspectives and agendas. She has been able to establish effective coalitions in contexts that seem inherently hostile. She demonstrated this through her election to the local school board and through her appointment by both Republican and Democratic governors, eventually as chair, to the statewide Governor's Committee on the Status of Women.

Alison Thorne's background prepared her to challenge restrictive social contexts, see the broader picture, and encourage progressive change. Educated in the field of consumption economics, which studies those aspects of consumption that operate outside the market system, especially government services and unpaid household production, primarily by women, she received a PhD in economics after graduate study at the University of Chicago and Iowa State, a first for a woman at the latter. Moving with her husband after he was hired at Utah State University, she soon discovered that her education and abilities were undervalued and that nepotism kept her out of an academic position. She devoted herself to research and writing about alternatives to the narrow definitions of a housewife's role and duties prevalent in the 1940s and 1950s. Both her scholarly work and her personal inclinations prepared her for the emergence of the second wave of feminism in the 1960s. Her participation in the fight for the Equal Rights Amendment honed her skills as an activist, which she applied to multiple other causes. But Alison Thorne's style has never been mere protest of injustice; she has always been fully engaged with her communities, directly working for social change and betterment. Rather than be discouraged by initial rejection, she found ways to contribute to education on the USU campus, eventually achieved academic standing, and helped create women's studies programs and a women's center. She met other challenges in her city and state similarly, by taking her gloves off, reaching out to others, building coalitions, and getting to work.