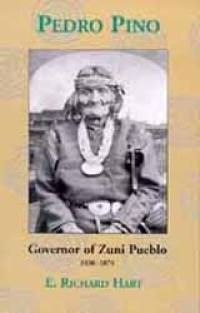 Pedro Pino, or Lai-iu-ah-tsai-lu (his Zuni name) was for many years the most important Zuni political leader. He served during a period of tremendous change and challenges for his people. Born in 1788 and captured by Navajos in his teens, he was sold into a New Mexican household, where he obtained his Spanish name. When he returned to Zuni, he spoke three languages and brought with him a wealth of knowledge regarding the world outside the pueblo. For decades he ably conducted Zuni foreign relations, defending the pueblo's sovereignty and lands, establishing trade relationships, interacting with foreigners—from prominent military and scientific expeditions to common emigrants—and documenting all in a remarkable archive. Steeped in Zuni traditions, he was known among other things for his diplomatic savvy, as a great warrior, for his oratory, and for his honesty and hospitality.

More than a biography, Richard Hart's work provides a history of Zuni during an especially significant period. Also the author of Zuni and the Courts: A Struggle for Sovereign Land Rights and the co-author of A Zuni Atlas, Hart originally wrote the manuscript in 1979 after a decade of historical work for Zuni Pueblo. He then set it aside but continued to pursue research about and for Zuni. Its publication, at last, inscribes an important contribution to Pueblo history and biography and a testimonial to a remarkable Native American leader. In an afterword written for this publication, Hart discusses his original intentions in writing about Pedro Pino and Zuni and situates the biography in relation to current scholarship.