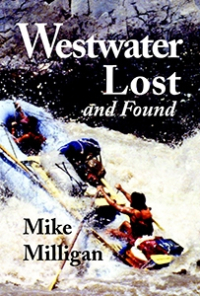 Buy Now
Copyright Clearance Center
Member Institution Access
"A thorough and fascinating book, one that should be in the library of river-runners and western history buffs alike."

"A well-researched and well-written book. But it is also a river book, a land use book, and an adventure book."

"I am impressed by the breadth and depth of the research that went into compiling this book."

Upstream from Moab on the Colorado River, near the Colorado state line, there is a relatively short, deep canyon that has become one of the most popular river-running destinations in America. The canyon is known as Westwater. Its popularity is largely due to the thrill provided by possibly the most, certainly one of the most, dangerous and challenging stretches of white water on the Colorado-Skull Rapid. Near the head of the canyon are the remnants of the tiny town of Westwater, which has had an interesting and eventful history of its own, partly because of the river and canyon, partly because of the railroad that passes through it, and partly because of its remoteness. It has attracted over the years more than its fair share of colorful characters—government explorers and agents, boosters and get-rich-quick dreamers, cattle and sheep men, outlaws and bootleggers, and, of course, river runners.

Mike Milligan, who came to know the area as a river guide, has written a thorough history of this out-of-the-way place. While it has a colorful history that makes its story interesting in and of itself, Westwater's significance derives more from a phenomenon of the modern West—thousands of recreational river runners. They have pushed a backwater place into the foreground of modern popular culture in the West. Westwater seems to represent one common sequence in western history: the late opening of unexplored territories; sporadic, ultimately often unsuccessful attempts to develop them; renewed obscurity when development doesn't succeed; their attraction of a marginal society of misfits or loners; and modern rediscovery of them due to new cultural motives, especially outdoors recreation, which has brought a great number of people into thousands of remote corners of the West.

In this heavily illustrated book, Mike Milligan has captured the still developing story of one of those remote, but no longer secluded, corners of the Colorado Plateau.

Mike Milligan began his river career in 1978, working for Western River Expeditions. He has boated the Colorado River from Loma, Colorado to Lake Mead, including Ruby Canyon, Westwater Canyon, Cataract, and Grand. He has also run most of the Green River, the San Juan River, and the Snake River.