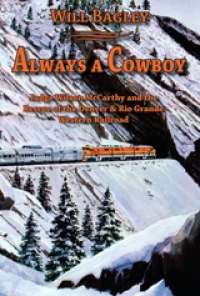 Cowboy, judge, federal official, then business executive, Wilson McCarthy mirrored change and growth in the twentieth-century West. Leading the Denver & Rio Grande back from the brink saved a vital link in the national transportation system. The D&RGW ran over and through the scenic Rockies, developing mineral resources, fighting corporate wars, and helping build communities. The Depression brought it to its knees. Accepting federal assignment to save the line, McCarthy turned it into a paragon of mid-century railroading, represented by the streamlined, Vista-Domed California Zephyr, although success hauling freight was of more economic importance. Prior to that, McCarthy's life had taken him from driving livestock in Canada to trying to drive the national economy as a director of the Reconstruction Finance Corporation, the first line of federal attack on the Depression. Always a Cowboy positions McCarthy's story in rich historical panorama.

The Association for Mormon Letters May 18, 2009 / Roy Schmidt

Will Bagley is the author of Blood of the Prophets: Brigham Young and the Massacre at Mountain Meadows.