Mormons on the Page, Stage, and Screen 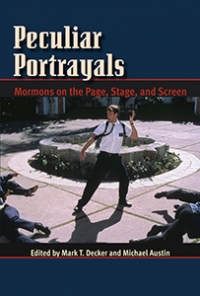 "The individual essays are universally engaging, erudite, and insightful. With publications like this one, the future of Mormon media studies looks very bright. Decker, Austin, and their contributors have created an invaluable resource."
—Randy Astle, Dialogue: A Journal of Mormon Thought

In a time when Mormons appear to have larger roles in everything from political conflict to television shows and when Mormon-related topics seem to show up more frequently in the news, eight scholars take a close look at Mormonism in popular media: film, television, theater, and books.

Some authors examine specific works, including the Tony-winning play Angels in America, the hit TV series Big Love, and the bestselling books Under the Banner of Heaven: A Story of Violent Faith and The Miracle Life of Edgar Mint. Others consider the phenomena of Mormon cinema and Mormon fiction, the use of the Mormon missionary as a stock character in films, and the noticeably prominent presence of Mormons in reality television shows.

Interview with Michael Austin: Dawning of a Brighter Day: Mormon Literature in the 21st Century, March 31, 2011

Mark T. Decker is assistant professor of English at Bloomsburg University. He has published essays on William Faulkner, Thomas Pynchon, Richard Wright, and Charles Brockden Brown. He is also interested in the connection between social thought and speculative fiction. His most recent essay on this topic appears in New Boundaries in Political Science Fiction (South Carolina 2008).

Michael Austin is provost and vice-president for academic affairs at Newman University in Wichita, Kansas. He has published books and articles on a variety of topics in twentieth-century American and eighteenth-century British literature. He is the editor of A Voice in the Wilderness: Conversations with Terry Tempest Williams (USUP).