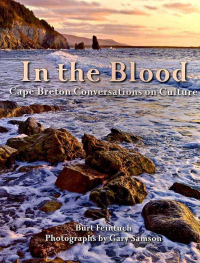 Folklorist Burt Feintuch was drawn to Canada's Cape Breton Island by the remarkably vibrant local traditional music culture. In fifteen years of fieldwork, he came to understand the complexity of a place both achingly beautiful and deeply challenged by economics. With traditional mining, farming, and fishing industries depressed, tourism, though significant, is a less-than-adequate replacement as economic engine, and the island has faced an ongoing decline in population.

In the Blood presents a set of interviews with twenty-two Cape Bretoners, representing a wide range of cultural engagement—a set of conversations about culture in a place where public discourse has focused on the idea of culture as an engine to pull the island out of its economic doldrums. Here we have master traditional musicians such as Buddy MacMaster and Mary Jane Lamond; the world-renowned writers Alistair MacLeod and Rita Joe; Gaelic and Francophone language activists such as Ginette Chiasson; well-known figures from the politics and local media, including Rodney MacDonald, Frank Macdonald, and Bob MacEachern; and cultural activists and economic planners such as Joella Foulds and Keith Brown, joined by representatives of heritage industries and others who are engaged with the island's thriving, and challenged, cultures. A cross-section of Cape Bretoners reflect on the sacrifices they make and joys they find living in such a culturally and scenically rich place.

Distinguished photographer Gary Samson's portraits of each of the twenty-two interviewees, as well as of the island itself, add a rich dimension to these thoughtful and revealing conversations. In the Blood is a model for thinking about economic development, tourism, and traditional culture.

Burt Feintuch, author of Eight Words for the Study of Expressive Culture and coauthor of The Encyclopedia of New England Culture, has produced several recordings of Cape Breton music, including The Heart of Cape Breton from Smithsonian Folkways. He is director of the Center for the Humanities and professor of folklore and English at the University of New Hampshire.

Gary Samson, chair of the Photography Department at the New Hampshire Institute of Art, is a widely exhibited fine arts photographer as well as a filmmaker and photographic historian. His photographs are in such permanent collections as the Currier Museum of Art and the State of New Hampshire's Percent for Art Program.