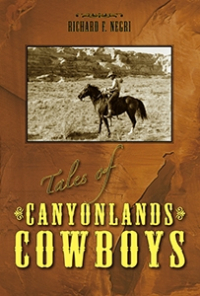 Before Canyonlands was a national park, before tourists discovered the wildness and wonder of the Maze and the Land of Standing Rocks, before the San Rafael Desert became a hive of the mineral exploration, the lands west of the Colorado and Green Rivers to the San Rafael Swell and from the Book Cliffs and San Rafael River south to the dirty Devil River and the Henry Mountains were pastures for the stock of hardscrabble cowboys and sheep ranchers.

Often based in the nearby villages of Green River or Hanksville, sometimes residing on remote ranches, such as the famous Robbers Roost Ranch or the Chaffin Ranch at the mouth of the San Rafael, the cowboys and ranchers spent much of their time camped out on the range with their stock. They herded under the Ledge, along the river south across Elaterite Basin, Ernie Country, and Waterhole Flat, and above on the flats, mesas, and head canyons running from the west.

They named many of the places, opened many of the trails, and were there to meet and guide the first petroleum explorers, archaeologists, and tourists. And they bristled at government management of the public lands, which they had grown accustomed to considering their own.

Richard Negri interviewed members of the last generation of those cowboys for stories of their early days in canyon country. Their tales provide an oral history of the first non-Indians to roam and reside in the Maze District of Canyonlands National Park and much of the surrounding wild and remote country.

Richard F. Negri has been a regular vistor to the Canyonlands National Park region since the 1960s and a persistent researcher, writer, and lecturer on the area's history since his retirement from the health profession in 1990.