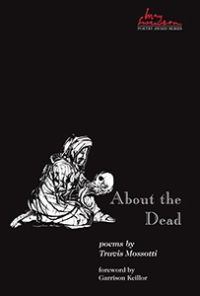 Travis Mossotti received a BA in English and French from Webster University and an MFA in poetry from Southern Illinois University–Carbondale. Recently a faculty lecturer at the University of California—Santa Cruz, his poetry appears widely in literary journals, including American Literary Review, Another Chicago Magazine, Cream City Review, New York Quarterly, Passages North, RHINO, Southern Humanities Review, and many others. Mossotti was awarded the James Hearst Poetry Prize from the North American Review in 2009, and "Decampment," the opening poem to About the Dead, was adapted to screen in 2010 as an animated short film (www.decampment.com). Mossotti currently resides in St. Louis with his wife, Regina.