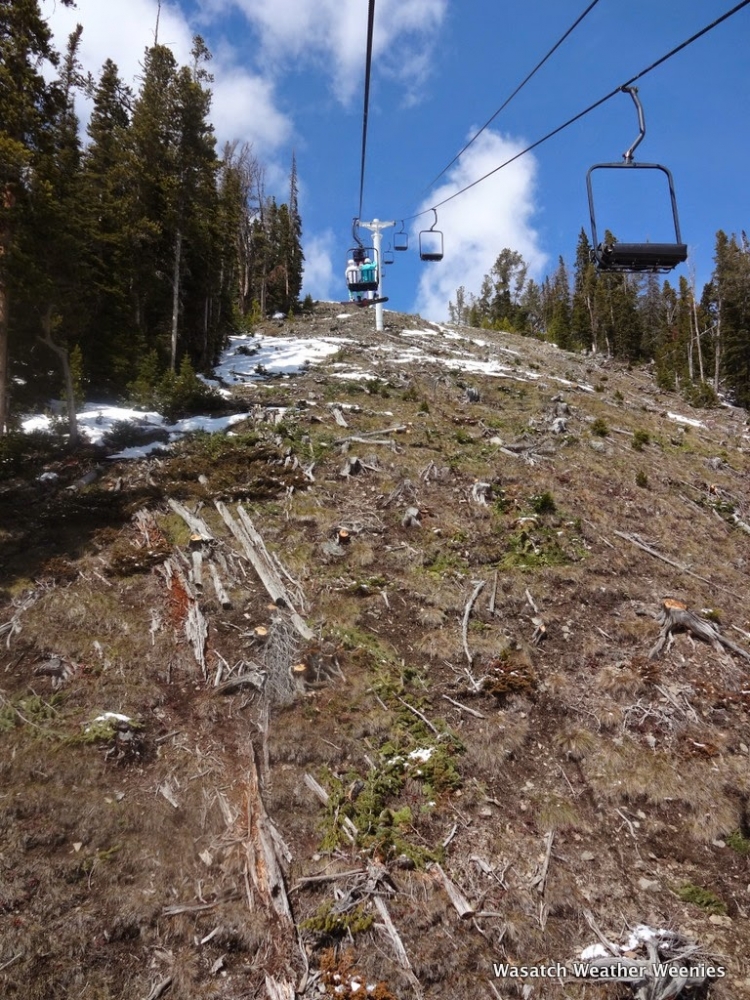 In Secrets of the Greatest Snow on Earth, I describe why powder skiing in Utah is so good and provide all sorts of meteorological knowledge for finding great snow in the western United States and around the world. This winter, however, even snow gurus have struggled to find the goods. There have been a few nice powder days, but for the most part it has been a dismal snow year in Utah and around the West.

The mountain snowpack in the western United States typically peaks on or around April 1. This peak happens a little earlier at warmer, lower elevations and a little later at colder, higher elevations, but the amount of water in the April 1 snowpack (known as snow-water equivalent, or SWE for short) provides a pretty good measure of what kind of winter we’ve had for snow.

A basin-by-basin map of the snowpack SWE on April 1, 2015, relative to median (i.e., the amount of SWE at which half the winters are higher and half the winters are lower) has everyone from skiers to water managers seeing red. There isn’t a single basin with an above-median snowpack in the entire western United States. 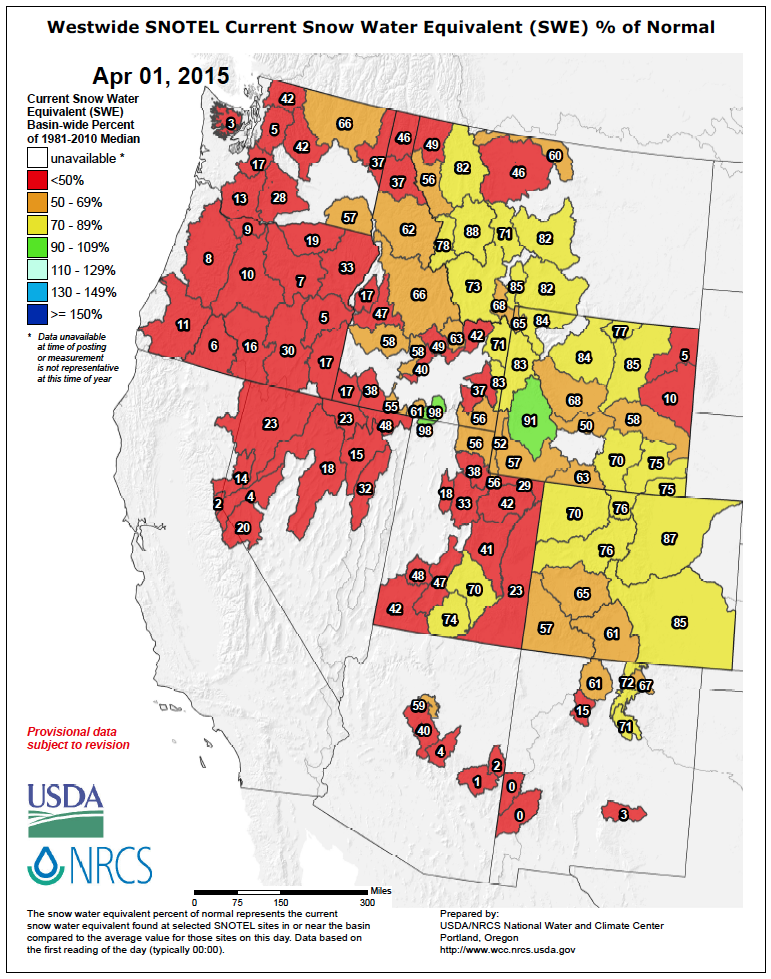 The numbers in the Sierras and Cascades are crazy low and, except for a couple of basins in extreme northern Washington, less than 20 percent. Many ski areas in these ranges were closed for long stretches of the winter. Even Mt. Baker, the snowiest ski area in the world (based on an average annual snowfall of 650 inches) and where a world-record 1,140 inches of snow was measured during the winter of 1998–99, was forced to close due to lack of snow in March. As of April 10, it is still closed, but hope remains that it will reopen for one final fling.

The colder high-elevation interior—including Montana, Wyoming, and Colorado—have done better, but it has still been a dismal year. I just got back from a visit to Big Sky, Montana, and while there’s good skiing to be had, the lower mountain was baked out in some places. 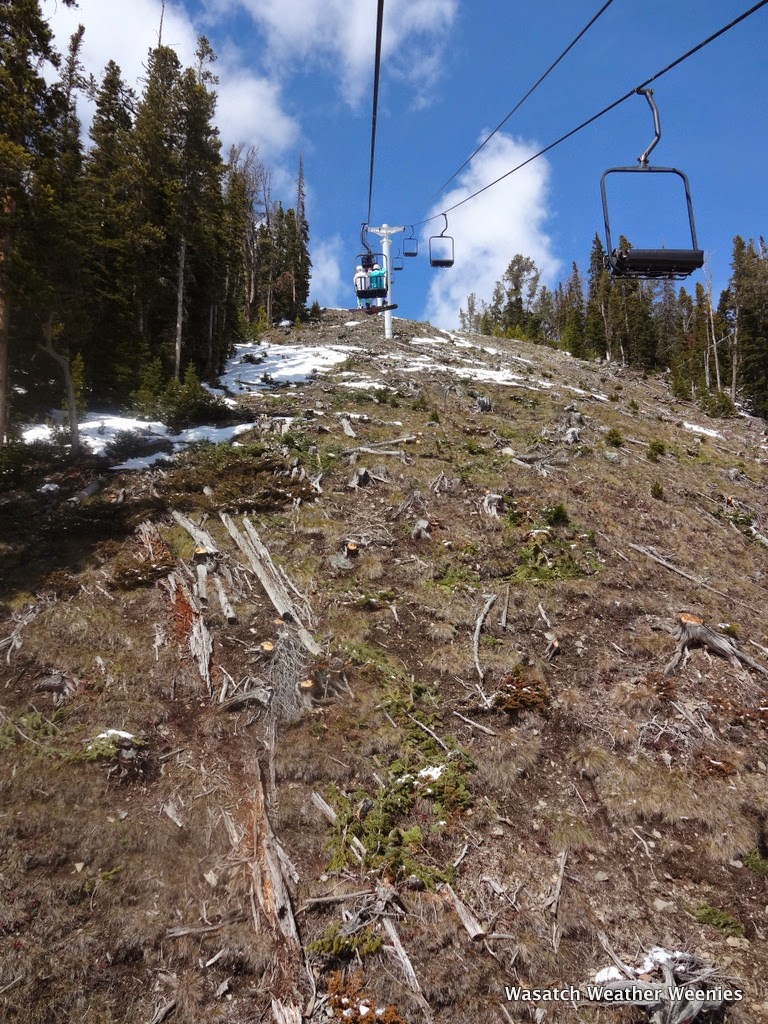 Even in my beloved Utah, it was a terrible season. In fact, records kept by professional “Avalanche Hunters” at Alta show that this is the worst snow year since records began after World War II. From November to March we had only 221 inches of snow. This obliterated the previous low of 265 inches in 1962–63. In all likelihood, when April ends, this will be the worst winter on record at a location that averages 500 inches of snow a year.

Although the snow numbers at Alta are the worst on record, there have been worse ski seasons. The great drought year of 1976–77 produced 284 inches of snow from November to March, but over 200 inches fell in February and March. There was hardly any snow in November and December, and without snowmaking, there was either no skiing or very limited skiing into February. At least this year we got early snow. In fact, the best stretch of skiing was during the holidays, with some pretty good bottomless conditions to be had in the Wasatch backcountry.

A lot of people have asked me if the bad snow this year is a reflection of global warming. My view is that it is largely a result of natural climate variability. We’ve had a big blocking ridge that has prevented Pacific storms from penetrating into western North America over the winter (conversely, the northeast United States has been very snowy). Good snow years will return, although the influence of global warming will play an increasing role in the climate of the West during the coming decades. If you want to know more, you’ll have to read chapter 9 of Secrets of the Greatest Snow on Earth.

Jim Steenburgh is professor of atmospheric science at the University of Utah, a leading authority on mountain weather and snowstorms, and an avid backcountry and resort skier. For more of his writings on the weather and climate of the western United States and beyond visit his blog: Wastach Weather Weenies.