Photo courtesy of the authors

Is old-fashioned hospitality still alive? We are not talking about the “hospitality trade,” which thrives on the corners of every highway crossing. We are talking about welcoming in strangers out of empathy and generosity, not out of the drive to make money.

Is old-fashioned hospitality still alive? We are not talking about the “hospitality trade,” which thrives on the corners of every highway crossing. We are talking about welcoming in strangers out of empathy and generosity, not out of the drive to make money.

The two of us wrote an academic book about old-fashioned hospitality. We also have lived, singly or together, in big cities—Spokane, Seattle, LA, Lima, Corpus Christi. Then we retired and moved to Del Norte, Colorado: population 1,655, median income $26,558, tourist interest 0. That’s where we found what we had written about.

Moving to a small town can fill you with dread. How are newcomers welcomed? Will we be fodder for the rumor mill? Will we ever be accepted as “locals”? We listened as members of the town board debated the merits of prospective candidates, finally siding with folks who grew up in the area, as if outsiders had nothing worthwhile to contribute. Around town our house was always referred to by its past occupants: the “Sherman house,” or going further back, the “Heller house,” but never the “Haswell house.” We felt obliged to put up a metal sign at the head of the driveway to announce it.

Yet this insider wall was no match for Del Norte’s small-town hospitality, which quickly beckoned us inside. The owner of the used book store spent afternoons instructing us on valley history and hiking trails. An environmental activist invited us to join a group vigilant against efforts to frack through the aquifer that supplies Del Norte with its water. And once when we were hiking to the top of Lookout Mountain, whose foot supports our house, we met a woman who encouraged us to meet her mother, who knew the Shermans and the Hellers. 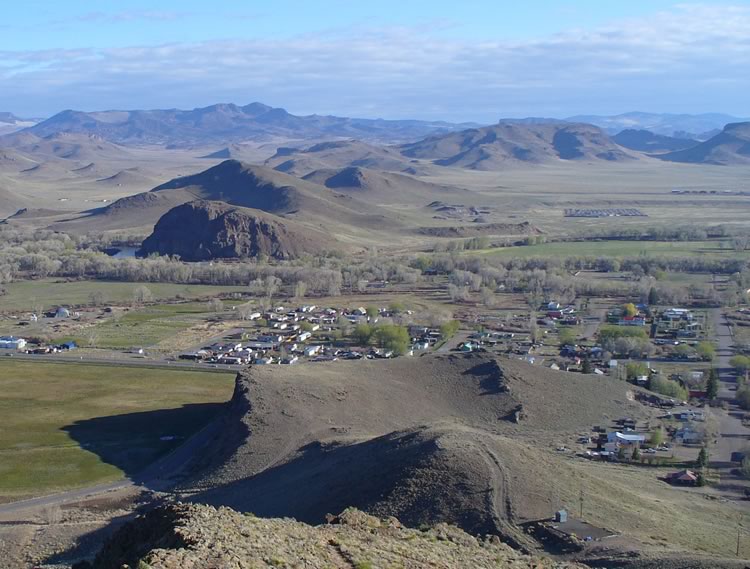 View of the west side of Del Norte from Lookout Mountain

And there were other gifted Del Norteans. There was Sophia, the retired lawyer and small-plane pilot who is writing a book about flying over the mountains of Colorado and passed us copies of the New Yorker; Min, the South Korean artist who debated novels, poetry, plays, and films with us and gifted us with her homemade kimchi; Caridad, the woman (surely the embodiment of Mother Nature) who gave us plants from her garden; Sarah and Carl, the cattle ranchers (with insane senses of humor) who gave us a jar of chokecherry jelly and a wood stove. (We’ve changed the names to protect the hospitable.)

And truly hospitable they all were. We were not exactly footsore wayfarers asking for a bit of bread and a bit of roof for the night, but every one of these Del Norteans invited us, total strangers, into their homes for a chat and a bite to eat. And that’s traditional hospitality.

Having washed up on the shores of Del Norte, we have discovered a treasure trove of people who are welcoming, gift giving, and gift receiving. No doubt bigger towns in Colorado (and how many are smaller?) offer new residents more than a savings book of coupons for local businesses. We could relocate and find out, but right now are happy where we are.

Richard Haswell retired as Haas Professor of English at Texas A&M University–Corpus Christi in 2008 and previously spent twenty-nine years at Washington State University, where he directed the composition program and the cross-campus writing assessment program. He has authored and coedited seven books: Gaining Ground in College Writing (1991), The HBJ Reader (1987), Comp Tales (2000), Beyond Outcomes (2001), Machine Scoring of Student Essays (2006), Authoring (2010), and Hospitality and Authoring (2015). In 2000, with colleague Glenn Blalock, he launched CompPile, an online, open-access bibliography of scholarship in composition and rhetoric, now the largest and most utilized in the field.

Janis Haswell is professor emerita of English at Texas A&M University–Corpus Christi. She is the author and coauthor of five books: Introduction to the Raj Quartet (1985), Pressed against Divinity: W. B. Yeats and the Feminine Mask (1997), Paul Scott's Philosophy of Place(s): The Fiction of Relationality (2002), Authoring (2010), and Hospitality and Authoring (2015), as well as some thirty articles in both literature and composition.