What on Earth Has Happened to Freshman English? 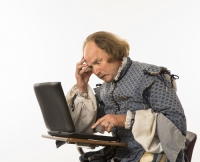 If you haven't been paying much attention, you may have missed a quiet academic revolution in one of the most conservative of disciplines: English and, particularly, the introductory writing course that almost all entering students were and still are required to take.

If you haven't been paying much attention, you may have missed a quiet academic revolution in one of the most conservative of disciplines: English—particularly, in the introductory writing course that almost all entering students were, and still are, required to take. When I taught my first freshman English course in 1958, we knew pretty well what it was all about: ask students to read literature and write on something related to it, mark with more or less severity any and all errors they committed, flunk those who didn't write well enough by our own definition, and complain—endlessly complain—about how terribly the students wrote. At the time, there was only one PhD program in what we now call rhetoric and composition, at Bowling Green State University, and there were a couple of journals published by the National Council of Teachers of English, focusing mostly on narratives of "what I do in class" and "how does it succeed." Along with the expressed goal of the course (to improve student writing), the freshman English course had several covert goals: to recruit English majors, to bar from advanced study those not comfortable with the college dialect, and to provide a minimal income to graduate students studying literature. Those teaching the courses were mostly graduate students in literature, and the program directors were literature specialists using the assigned administration time to write books and articles in their specialties. Anyone who took a professional interest in these courses was generally mocked and pitied.

Fast forward to 2015. The most recent survey—in Rhetoric Review, one of the twenty or more journals now flourishing in the field—shows sixty-five PhD programs producing well-trained teachers and scholars in the field who now fill positions as writing program administrators (WPAs—WPA is also the name of an important professional organization with its own journal) in higher education institutions of all kinds. The first-year course, no longer freshman English and more and more removed from English literature (in some institutions, from the English department as well), is now first-year composition (FYC) and often only one part of an extensive writing program extending from placement testing of entering students and a range of required first-year writing courses to upper-division writing requirements—often under the purview of a writing across the curriculum or a writing in the disciplines program and supported by a university writing center—and senior capstone courses usually involving writing in the major. The teaching of writing has recognized that most writing in this century is done in a technological environment and many classes submit work online, where peer review of early drafts is common, revision is routine, and e-portfolios determine final grades. And that first-year writing course, now well correlated with student success in college, is much more concerned with helping all students succeed than with getting rid of the unprepared.

Instead of drifting more and more to the periphery of undergraduate education, as some predicted fifty years ago, the writing program has moved more and more to the center. With writing recognized by teachers throughout the university as a student's chief means of learning and with students looking for more writing courses in schools of business, engineering, nursing, and the sciences, writing has come out of the shadows. The new scholars in rhetoric and composition now trace the roots of the discipline to Aristotle and Quintilian, with links to linguistics, educational measurement, developmental psychology, neurological studies, anthropology, and philosophy, as well as the more traditional connections with literature and the writing of poetry and fiction. International research has shown the varieties of dialects and language cultures that exist, with their different ways of developing arguments, citing research, and expressing ideas—concepts that are changing the teaching of English as a second (or other) language as well as FYC. Writing—thinking made visible—is now everyone's concern.

As I sit at my computer in retirement, I sometimes am overcome with wonder that the field I entered has—in one lifetime—so changed its content, its goals, its importance. Mrs. Grundy, that harsh figure of prim correctness, still exists, though in sharply diminished numbers, as do a few old-fashioned English departments, clinging to the requirements in force when I entered graduate school and based on the works of Chaucer, Spencer, Shakespeare, and Milton. But when we look at modern documents such as the WPA's Outcomes Statement for First-Year Composition (version 3.0, 2014) or the National Council of Teachers of English's 21st Century Literacies (2008), we realize that we have witnessed a startling change, comparable to the movement from astrology to astronomy or from alchemy to chemistry. Who would have imagined such a revolution when I started teaching?

Edward M. White is emeritus professor of English who held positions at California State University, San Bernardino, and the University of Arizona.