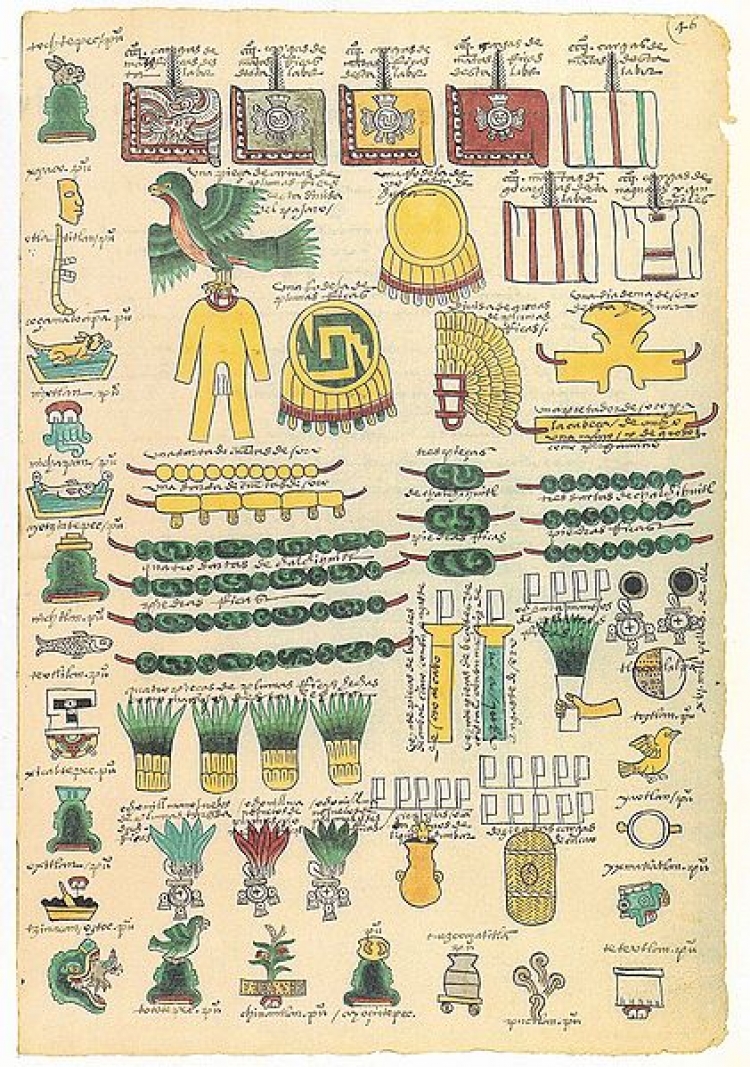 Lists the tribute that towns were required to pay to the Aztec empire Codex Mendoza (1542) Folio 46r, from the Public Domain Review (http://publicdomainreview.org)

Archaeologists love the surplus concept. It fuels the contours of long-term historical perspectives on social change and transformation. It lies at the root of human social relations and cultural perceptions of the world. Society must produce more than the biological minimum, otherwise society ceases to exist.

Archaeologists love the surplus concept. It fuels the contours of long-term historical perspectives on social change and transformation. It lies at the root of human social relations and cultural perceptions of the world. Society must produce more than the biological minimum; otherwise, society ceases to exist. Without surplus, we have little more than our animal behavior. In classical political economy, this idea links many disparate thinkers, from John Locke to Adam Smith to Karl Marx. Surplus permits humans to transcend their animal needs by converting (and humanizing) nature—via labor—into something else. Other mammals work and even create tools to help them do it. But only humans can take energy and, through their work, convert it to power. The ability to produce more than we need to survive—as well as store, save, exchange, and convert that surplus—represents a unique human ability. Little wonder then that the surplus concept has been so influential in archaeological research on social transformation.

Archaeologists and anthropologists often have been imprecise in dealing with this topic. In the 1950s and 1960s, this imprecision partly generated debate. Scholars debated the “utility” of surplus and other concepts drawn from industrial market capitalism in explaining different economic systems. This was a big debate in anthropology during a time when anthropology still sought self-definition. But like many debates, it fizzled out. Relatively few discuss the “substantivist” versus “formalist” debate today. However, a historically ironic realization emerged as anthropologists looked beyond the closed universes of their conventional case studies to a progressively globalized world. The terminology (and its consequences) that has long been criticized as Western, biased, and “etic” has indeed come to constitute and influence the social lives of the people anthropologists long have studied. Surplus has many operationalized dimensions depending on what exactly is being analyzed: domestic and international trade, supply and demand, governmental taxation and budgets, household budgets and savings, etc. Surpluses are connected to distinct, albeit interconnected and overlapping, institutions and differ depending on the context in which they are generated and, more significantly, what they represent. This difference is both quantitative and qualitative. At least one lesson from anthropology is that not everything is fungible.

In a globalized political economy, how and what we produce, overproduce, exchange, convert, consume, and waste have important consequences for people's lives and for the future. Complex societies, states, and empires develop specific policies directed toward surplus production. The production and mobilization of surplus both finance institutions and elite lives and also often increase the dependency of subject communities on a state political economy. The governmental subsidization of corn or maize (Zea mays) in the United States offers an interesting example of surplus production and exchange and its consequences. In the past, agricultural subsidies were implemented to protect small family farms, but this has changed as more agricultural production is undertaken by large farms. Corn is the number-one agricultural commodity to receive governmental subsidization. Between 1995 and 2010, over $75 billion was spent on corn alone in the United States. With the recent passage of the Agricultural Act of 2014 (HR 2642), even more is slated to be spent in the form of crop insurance rather than direct payments. Government intervention into the price and production of corn has many national and international consequences. The ethanol industry, for example, receives a substantial amount of governmental subsidization, allowing its market to expand despite the fact that ethanol has a terrible energy return on investment. Other markets are affected also. With the passage of the North American Free Trade Agreement (NAFTA), US agricultural producers have been able to flood Mexican markets with cheap surplus corn, drastically lowering the price of locally produced crops. Many local farmers have difficulty competing. They sell their land (often to developers who build massive condominium complexes), move to cities (or into condos), or emigrate. As ecosystems and former agrarian practices are destroyed, poverty increases and people become more dependent on a new global economic system. Ironically, if you eat a tortilla in Mexico today—in the country where corn was first domesticated and where people take to the streets shouting “¡Sin Maíz No Hay Paíz!”—there’s a good chance it was made from US corn. And now Monsanto is trying to enter the Mexican market, ostensibly to address poverty by increasing domestic production in Mexico through the cultivation of genetically modified maize and other crops. If successful, one wonders how Monsanto will be able to enforce on Mexican smallholders its prohibitions on seed saving—a household-based surplus practice that predates domestication itself.

The Aztec empire offers an interesting comparison. The political economy of the Aztec state was based upon the unique integration of taxes on goods and services, land rents, and market exchange. The Codex Mendoza is an example of an early Colonial period copy of a pre-Hispanic tribute roll in which the Aztecs recorded the taxes they received, including everything from agricultural products (like corn, beans, amaranth, and chia) to goods and prestige items (like greenstone jewels, golden diadems, and jaguar pelts). Early Spanish conquerors also offered vivid descriptions of Aztec marketplaces, the likes of which did not exist in a Europe just emerging from the Dark Ages. In the 1970s, ethnohistorians Edward Calnek and Frances Berdan argued that the different economic systems of the Aztec state were highly integrated. Where these systems articulated, the government could indirectly influence the market and the livelihood of subjects, a possible first step toward greater governmental centralization of the market. Many goods the state received as taxes were used to pay individuals, who exchanged them at marketplaces for subsistence products. As urban centers grew in size, more city dwellers also specialized in craft production for market sale, trading these goods for food produced in the rural hinterland. Flooding the market with craft goods reduced the price of craft production in rural areas. This caused many former craftspeople to become full-time farmers dependent on the transforming political economy of the empire. Much of this trajectory comes from interpretations of early Colonial historic texts. Archaeological evidence suggests that incorporation into the empire affected areas differently, with craft production declining in some areas and increasing in others.

The causal links between each of the elements in these cases are certainly more complex than I present them here. Nevertheless, thinking about surplus helps us to understand the consequences of the policies and practices of complex societies. However, archaeologists need better methods of defining surpluses and more ways to identify and measure them. Archaeologists in particular are at a disadvantage in this regard, because they cannot actually ask people what they thought about this or that. But we have control over time scales that few other disciplines can approximate. Employing ideas and concepts drawn from contemporary economics does not necessarily mean that we will homogenize cultural, institutional, and historical differences. Rather, this approach can accentuate the areas where past and present societies share similarities but also differ in important ways.

Christopher T. Morehart is an assistant professor at Arizona State University and specializes in the political economy and historical ecology of Mesoamerica. His current research centers on the long-term historical and political ecology of the northern Basin of Mexico, combining archaeology, ecology, geology, botany, history, and ethnography. He also collaborates as an ethnobotanist on archaeological projects in Lowland Mexico, Belize, Guatemala, and the southeastern United States. He is the coeditor, with Kristin De Lucia, of Surplus: The Politics of Production and the Strategies of Everyday Life.