The Forgotten Artist Who Painted the Unforgettable Face 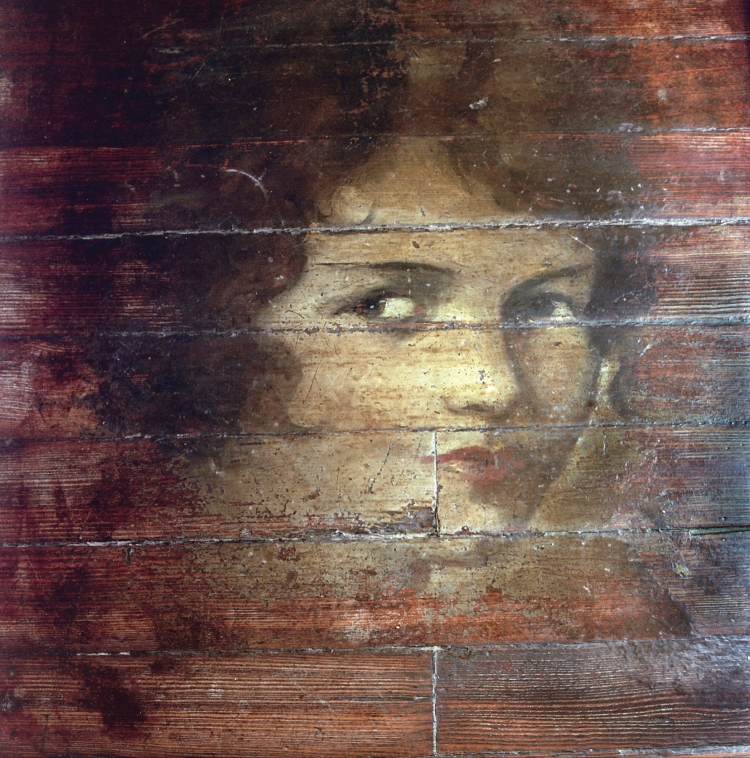 He painted Colorado's first widely known piece of public art. Probably a million people have stared into her big brown eyes and studied her Mona Lisa smile. Yet few know the name of her creator-husband.

The following was originally published in The Denver Post on April 15, 2016.

He painted Colorado’s first widely known piece of public art. Probably a million people have stared into her big brown eyes and studied her Mona Lisa smile. Yet few know the name of her creator-husband.

Herndon Davis painted the Face on the Barroom Floor in what is now The Face Bar in Central City’s Teller House in 1936. The Central City Opera House Association hired him to do sketches in conjunction with restoration of the Central City Opera House and the Teller House next door. In that hotel’s vintage barroom, Davis determined to paint ”such a floor as the ragged artist used in H. Antoine d’Arcy’s famous old poem.” Fortunately, Davis fared better than the drunken, scorned artist in the poem who finished the face of his lost lover and fell across her painting—dead.

Yet Davis too had been scorned—by Anne Evans. The daughter of Territorial Governor John Evans, she was a philanthropist behind much good work for the Denver Art Museum, the Denver Public Library, and myriad other causes. She ruled the Central City Opera House rejuvenation and apparently grew upset with Davis’s raunchy preference for painting low-life characters. She either fired him or he resigned.

Davis then proposed the face but said: “The hotel manager and the bartender would have none of such tom-foolery. Still the idea haunted me, and on my last night in Central City, I persuaded the bellboy Jimmy Libby to give me a hand. After midnight when the coast was clear, we slipped down there. Jimmy held a candle for me as I painted as fast as could. It was 3 a.m. when I finished. By the dawn’s early light I lit out for Denver.”

The Denver Post and the Rocky Mountain News had higher opinions of Davis and commissioned him to paint or draw Colorado’s most notable characters and historic landmarks. Those images have given Coloradans colorful alternatives to the standard black and white photos of the likes of John Evans and Horace and Baby Doe Tabor. Davis also painted John Gregory, who discovered the first mother lode of the Colorado Gold Rush. His Gregory Lode gave birth to Central City, Black Hawk, and Gilpin County’s gold boom. Gregory disappeared without a trace or any known photograph, but Davis gave him a face painted from written descriptions.

Little-known today except as “that drunk who painted the Face on the Barroom Floor,” Davis was once a sought-after artist. He created skilled sketches of celebrities such as presidents Herbert Hoover and Franklin D. Roosevelt and Hollywood types like Katherine Hepburn and Douglas Fairbanks. A student of the famed Howard Pyle, a prominent East Coast artist and art instructor, Davis started out as an illustrator for eastern publications such as the New York Times and the Washington Post.

Yet he wound up in Denver, hungry for commissions to paint portraits in basements, including those of famous Denver journalists in the Denver Press Club. Davis died in 1962 in Washington, DC, where the Smithsonian had commissioned him. This most prolific painter of Colorado movers and shakers also painted landmark buildings ranging from the now gone Tabor Grand Opera House to Mattie Silks’s 1942 Market Street bordello. His colorful renderings of Colorado’s past are being resurrected by the Denver Public Library, whose Western History/Genealogy Manager Jim Kroll has organized an exhibit of Davis’s famous faces and places. It will open May 15 at the Central library at W. 14th Avenue and Broadway, free to all, as are all of DPL’s wonderful programs and resources.