Why It Is Worth Reconsidering the Common Sense about Bureaucracy 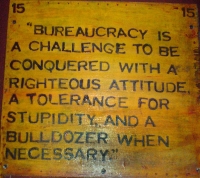 In 2008, the CIA declassified a World War II document titled the Simple Sabotage Field Manual. The SSFM was produced by the Office of Strategic Services to help “ordinary citizens” in enemy or occupied territory conceive of ways to support Allied war efforts.

In 2008, the CIA declassified a World War II document titled the Simple Sabotage Field Manual. The SSFM was produced by the Office of Strategic Services to help “ordinary citizens” in enemy or occupied territory conceive of ways to support Allied war efforts. Among other tactics, the manual details options for using bureaucracy to “harass and demoralize enemy administrators and police” and subvert enemy organizations. Options include “insist[ing] on doing everything through ‘channels,’” “refer[ring] all matters to committees for ‘further study and consideration,’” and “haggl[ing] over precise wordings of communications.”

The manual has been widely disseminated through social media outlets and editorialized on various websites (here, here, and here), and even though the section on bureaucratic obstruction is only a small portion of the manual, many people have fixated on the instructions for weaponizing bureaucracy as further proof that bureaucracy is a blight on society.

There are certainly good reasons to hate bureaucracy, as anyone who has recently tried to get a driver’s license can attest. But the common sense of hating bureaucracy bears closer consideration. As a rhetoric scholar, I study how people use symbols, including language, to make things happen in the world. Another way to put it is that rhetoricians study the ways people argue about how to live together, including how people activate doxa.

In rhetorical studies, doxa generally refers to the common sense of a community—what the majority of people in a particular community take for granted: murder is bad, the scientific method generally yields reliable information about the physical world, and so on. The beliefs that make up doxa change over time in relation to a community’s discursive conventions, but by carefully considering how people activate doxa, it is possible to ascertain the common sense of a community, that is what community members take for granted.

The belief that bureaucracy is detestable is doxic in twenty-first-century North America, and as such, it can be activated with little evidence. Hence the predictable commentary on the Simple Sabotage Field Manual more than seventy years after its publication. But because anti-bureaucratic sentiment is so “commonsensical,” members of the community often forget—or ignore—alternate perspectives.

Notwithstanding common sense, it turns out bureaucracy has much to commend it. At its best, bureaucracy is radically egalitarian—designed to formalize the “best” choices in a system and make them available to everyone. Bureaucracy, obviously, does not always reach this ideal, but when it does, it is indispensable to the advancement of society. For instance, as Jack Lynch argues in a recent study of reference guides, “[T]he reference book is responsible for the spread of empires, the scientific revolution, the French Revolution, and the invention of the computer.” Perhaps even more implausibly, Timothy Snyder argues that bureaucracy can save lives. In his history of the Holocaust, Snyder argues that where sovereign states and bureaucracies remained strong, Hitler’s Final Solution was the least effective. “Many of the things that make bureaucracies annoying in daily life,” he writes, “could and did mean survival for Jews.”

Of course, the affordances of bureaucracy are not inseparable from its often-infuriating constraints, but they can be powerful and should be appreciated. In a cultural moment when “cutting through red tape” is apparently a universal doxic value, we would do well to remember bureaucracy’s benefits as we make larger arguments about everything from public education to the burgeoning gig economy. Bureaucracy can serve important purposes and often prescribes options for making things happen in the world.

Ryan Skinnell is assistant professor of rhetoric and composition and assistant writing program administrator in the Department of English and Comparative Literature at San José State University. His upcoming book with USUP, Conceding Composition: A Crooked History of Composition’s Institutional Fortunes, will be available in September. He is also a coeditor of What We Wish We’d Known: Negotiating Graduate School, and his research has appeared in Composition Studies, Enculturation, JAC, Rhetoric Review, WPA: Writing Program Administration, and edited collections.