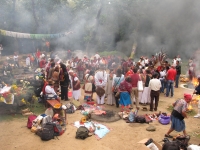 Participants in the Sacred Circle celebrate at Iximche (photo by C. James MacKenzie)

An increasingly disparate swath of practices and traditions are now united in controversy as discussions of cultural appropriation go viral.

From cornrows to yoga to sushi, an increasingly disparate swath of practices and traditions are now united in controversy as discussions of cultural appropriation go viral. While one could imagine a number of strong contenders for the “most appropriated culture” award, any of the diverse indigenous peoples of the Americas would have my vote (two words: hipster headdress).

As an anthropologist working in Guatemala for two decades, I have been interested in understanding how Maya people, both in local communities and nationally, approach challenges to their cultural autonomy. For example, I’ve studied the way those promoting a revitalized tradition generally referred to as “Maya Spirituality” deal with both ethnic others and those Maya with different, generally Christian, religious sensibilities.

At least since the 1990s, promoters of Maya Spirituality have sought ways to carve out spaces where they may exercise some authority, often engaging networks that link indigenous spiritual adepts across the Americas. I was able to witness one such effort in September 2014, when the Sacred Circle of Wise Grandmothers and Grandfathers of the Planet celebrated their ninth annual meeting at the Postclassic Kaqchikel capital of Iximche in the Guatemalan Highlands. Here local Maya played host to a contingent of indigenous spiritual leaders from South America and Mexico, present to celebrate the fall equinox.

Qenqo Harawi Qespeq founded the Sacred Circles in 2006 in Cuzco, Peru, with the aim of gathering elders and pilgrims from different countries to further his goal of pan-indigenous spiritual unity. Included as pilgrims at Iximche was a large contingent of white settler and European New Age seekers whose commitment to indigenous unity and cultural politics—versus, say, their own personal spiritual development—varied considerably. Cultural appropriation, or something in that ballpark, seemed inevitable.

Still, from what I could determine, despite the honest efforts of the Guatemalan hosts, participants left with little exposure to things “Maya,” at least of the sort promoted by the practitioners of Maya Spirituality that I have come to know. The ins and outs of the 260-day sacred calendar that shamans still use, the nature of Maya divination, the character of Maya myth: none of these themes were broached in any detail. Rather (simplifying considerably) much time was spent chanting and dancing around bonfires, sharing personal testimonies of spiritual growth, and joyfully announcing the return of an ecological and transcendental indigenous sensibility to heal our suffering planet. I got the sense that the participants had all done this before, if elsewhere.

What I was witnessing was something far from a straightforward case of cultural appropriation. Rather, the Sacred Circles seem firmly in the tradition of what the anthropologists Jacques Galinier and Antoinette Molinié have called Neo-Indianism, a transnational religion centered in Peru and Mexico and developed through several decades of complex and fitful collaboration between spiritualists with various claims to indigenous ancestry and New Agers of assorted backgrounds. It seems that as erstwhile "local" indigenous traditions have been brought into conversation with each other through this particular medium, the spiritual grammar adopted deals largely in cosmic energies, sun worship, and ecological harmony.

In retrospect, it’s not surprising that more particular Maya messages had trouble finding space in this specific context, much less risk appropriation. In the wake of all the apocalyptic attention the 2012 phenomenon generated, perhaps that’s for the best.

For the record, the next Sacred Circle will take place this September in Manhattan. And why not?

C. James MacKenzie is associate professor in the Anthropology Department at the University of Lethbridge in Alberta. He has conducted research on religious, political, and economic change in San Andrés Xecul, Guatemala, since 1999. His book Indigenous Bodies, Maya Minds: Religion and Modernity in a Transnational K'iche' Community was published in the IMS Studies on Culture and Society series in April 2016.