Is the Classic “Maya Collapse” Really an Object Lesson for Civilization Today? 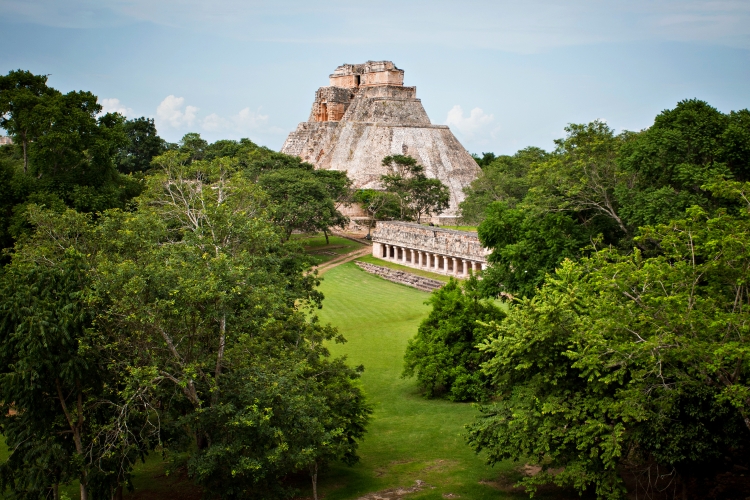 Does the "Maya Collapse" warn us of the path that our current civilization is following?

Over the last ten years, as journalists and politicians have become concerned with climate change, the “Maya collapse” has increasingly been invoked as a just-so story to warn us about the dangers of environmental degradation, overpopulation, and the impeding collapse of contemporary global civilization. Typically, this just-so story starts by assuming a Malthusian trap (see especially chapter 2 in the hot link), in which Maya population grew independently of environmental limitations, creating food shortages. In response, the Maya increasingly converted forests to agricultural fields (primarily for the intensive cultivation of maize), eventually cutting down all trees in their environment. Massive deforestation, in turn, changed the water cycle, making the Maya more vulnerable to natural environmental perturbations. Thus, overpopulated and living at the margin in a fragile environment where food supplies barely fed the population, natural cycles of drought (some severe, some not) became catastrophic during the final years of the Classic period (AD 700–900), and Maya civilization experienced a cataclysmic collapse—a total demographic, economic, political, and social collapse. Implied but unstated in this scenario is that the Maya starved to death by the hundreds of thousands, maybe even the millions, leaving the vast territory they had inhabited devoid of human occupation by approximately AD 950. According to the journalists that invoke this story, this is the path that our current civilization is following and we should take heed of the Maya.

Central to this collapse is the idea that the Maya were overpopulated—but were they? While we know of many Maya cities, both large and small, that were occupied during the Classic period, nearly all archaeological research on these cities has focused on their monumental epicenters. Only a handful have had their urban cores mapped using full covered archaeological survey techniques, and full-coverage survey of large swaths of what would have been rural areas during the Classic period is virtually absent or not published. Such mapping would allow archaeologists to identify houses and residential compounds and, thus, determine the number of residential units and their distribution across the landscape. These data provide the most reliable mechanism for determining how many people lived in a study area (e.g., the Maya area) during a particular period (e.g., the [Terminal] Classic period) in the absence of censuses. Without systematic archaeological surveys, archaeologists have no way to reliably estimate the number of Maya living in the Maya area during the Classic period; and thus, no way to determine if they were overpopulated. From the few surveys that have been published, we may conclude that, in general, the Maya lived in low-density settlements and had a dispersed settlement pattern with relatively large unoccupied spaces between houses. We also know from other regions that in the absence of systematic archaeological survey data, we tend to overestimate population size because we are attracted to areas with monumental architecture. This means, in the case of the Maya, that most households likely had access to relatively large amounts of cultivable land and settlements were not overpopulated.

What about deforestation? As noted above, overpopulation was probably not happening, but did the Maya level their forests for agricultural reasons? Recent research is beginning to show that the Maya may not have leveled their forests and instead created a cultivated landscape marked by a complex patchwork of productive mosaics, which interspersed intensive cultivation of grains, tubers, and legumes with silviculture, including forest management and orchards. These studies also suggest that forest burning and erosion ebbed over the course of the Classic period, being highest at the onset of the period and then decreasing to reach their lowest point during the Terminal Classic. Paleoethnobotanical analysis of archaeological carbon collected from different types of ovens and kilns shows that the Maya did not indiscriminately burn whatever species of tree was handy but, rather, selected certain species for certain practices (e.g., lime production). Finally, research is beginning to show that the Maya relied on a vast array of cultigens, many of which were highly resistant to drought and highly productive (e.g., tubers like manioc), and did not limit cultivation to beans, squash, and, especially, maize, which are highly sensitive to droughts and provided limited yields in many parts of the Maya area. In fact, maize may have been only a minor feature of their diet. This means that food pressure was probably not as great as the just-so story claims, which implicitly assumes that maize dominated the caloric intake of the Classic period Maya.

What about the environmental disaster scenario? Does demographic collapse correspond precisely with cycles of severe droughts or follow shortly thereafter? The dating of collapse based on calendar dates carved into stone monuments and radiocarbon dating of the cessation of monumental construction (e.g., palaces and pyramids) seems to suggest that abandonment corresponds nicely with the timing of droughts. Yet, these dates are limited to the households of rulers and site epicenters, which were monopolized by ruling houses. Thus, these data cannot be extrapolated to the vast majority of the population. Furthermore, the production of fancy pottery used to date occupations and abandonments was often controlled by or linked to specific royal or elite households; thus, a decline in the power of an important household meant that the production of a particular type of diagnostic pottery ceased. However, this does not mean that low-status households were abandoned. Most of the population used plainware cooking and storage pots that changed in style slowly over time. Thus, these vessels are not time sensitive and the households using them may have endured for decades, even centuries, after royal houses declined. This means that currently, demographic collapse cannot be correlated with the timing of droughts. To test this idea we need dated samples of a large swath of low-status houses. Thus, we simply do not know when commoners abandoned their homes or starved to death.

This leads to a final question: is there any evidence the Maya were starving or malnourished during the Terminal Classic? Comparative bioarchaeological research on samples of skeletons from the Preclassic, Early Classic, Late Classic, and Terminal Classic have shown that the ancient Maya experienced different types of nutritional stress. However, when viewed across time, there is little change in the frequency of stress markers. Moreover, the minor change that is detectable seems to indicate that the frequency of stress markers decreased over time, which means that Terminal Classic populations were possibly slightly healthier than during earlier periods. Importantly, these biological data show without a doubt that health did not decrease as the population grew over the course of the Classic period. Accordingly, the Maya were not starving or suffering from increasing malnourishment as the Classic period came to an end.

As a result, the available scientific information is insufficient to conclude that the Maya were overpopulated, deforested their environment, and, thus, caused an environmental catastrophe that resulted in thousands or millions of people starving to death. While this may have happened, it may very well not have happened, and the proximate causes of the “Maya collapse,” as many scholars argue, may lie elsewhere and involve political, economic, or social issues.

Lane F. Fargher is investigator in the Department of Human Ecology, Centro de Investigación y de Estudios Avanzados del IPN—Unidad Mérida, Yucatán, México, and codirector of the Tlaxcallan Archaeological Project (in Tlaxcala, Mexico). A Mesoamerican archaeologist and cross-cultural researcher, he is interested in the role of cooperation and collective action in markets, ancient cities, landscapes, and households. He is a co-editor of Alternative Pathways to Complexity and a contributor to How Humans Cooperate.