The Longest Poem in the World 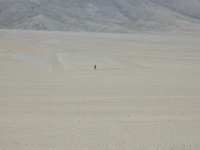 The Atacama Desert is the driest desert in the world. Parts of the Atacama have not been splashed by a raindrop in recorded history.

"Arid plains do not dream."
—Raúl Zurita, The Desert of Atacama VI

The Atacama Desert is the driest desert in the world. Parts of the Atacama have not been splashed by a raindrop in recorded history. Northern Chile is particularly arid. Away from a few narrow river valleys, the landscape is barren of vegetation and nearly empty of life. In portions of the Atacama, soil samples are absolutely lifeless even at the microbial level, the only place on Earth where this is true. The wind scrapes. The gravelly sand is gray. The distant hills are slate, and the deep-blue sky is fringed by a fog bank climbing from the Pacific Ocean to the west. There are few traces of human lives, except for the lines on the land that brought me to this desolate place thousands of miles from my home.

It is October 2009, and I am here with my friend, the poet and essayist Bill Fox. Bill’s thirteen non-fiction books and innumerable essays orbit around issues of how people make sense of landscape, an intentionally broad topic he has explored in such different places as the Great Basin, the Central Desert of Australia, and Antarctica. Seven years before, Bill and I met as fellows at the Getty Research Institute, where we immediately realized that we had a lot to talk about. Our divergent interests intersect at many points, and those conversations have continued over the last fifteen years.

Which is why we were in Chile. We flew north 1100 km from Santiago to the port and mining center of Antofagasta, where I had reserved a 4 × 4 Chevrolet pickup at the airport. We stopped at a mini-mart and bought four gallons of drinking water. I traveled with a duffle bag packed with duct tape, vise grips, a Leatherman™, a machete, an entrenching tool, and other stuff for emergency repairs. We left Antofagasta following the coast, drove east through a coastal chain of hills before joining the Pan-American Highway, and traveled south about 40 km where we turned off the pavement and headed southwest into an unnamed arroyo. Using my Garmin GPS, Bill and I calculated our route, tracing a graded gravel road past nitrate test borings and tailing piles. We followed our bearings and best guesses to the south until we spotted a small triangular dry lake bed, shimmering alkaline in the desert sun, which we recognized from our Google Earth research. I turned off the engine and let the truck roll to a stop. We were enveloped in dry silence. Just north of us, we saw low berms and broad, shallow trenches bulldozed into the desert.

We were at the location of the longest poem in the world. It is a four-word poem that stretches over 3 km, the creation of the Chilean poet Raúl Zurita. The poem in its entirety reads, “ni pena, ni miedo,” or “without pain, without fear.” Born in 1951, Zurita was swept up in the repression that followed the 1973 overthrow of Salvador Allende and the dictatorship of Augusto Pinochet. Initially imprisoned with hundreds of other political prisoners in the pitch-black hold of a ship, after his release Zurita used his art as a tool of resistance. This geoglyph is one result.

“Geoglyph” is an elastic term, stretched to cover a wide variety of human-made works on the ground: figures, ritual pathways, labyrinths, intaglios, and other forms. As with so many inscriptions on the landscape—whether mounds, rock art, roadbeds, or tombs—most geoglyphs are simultaneously obviously human and profoundly unknowable. Ironically, this remote poem carved into the Atacama Desert is the most literal and oddly accessible example of a geoglyph I have ever seen. In Zurita’s case, we know about the contexts surrounding this work: the tortures and disappearances during the seventeen years of the Pinochet regime, the response and resistance that poetry reflects, and the capacity for works of art to respond profoundly to human events of enormous scale—whether genocides or broken hearts. Of his poetry in general, Zurita commented, "Art draws attention to things of this magnitude. Poetry is something like the hope for that which has no hope."

Yet with all of the available information about this poem inscribed in the Atacama Desert, neither Bill nor I anticipated the physical beauty and sculptural impact of Zurita’s poem. The letters are carved in an elegant cursive script flowing through the sand. The stems and arcs of each letter are formed by broad flat trenches, about 40–60 cm deep and 6–8 m wide and flanked by crisp berms about a meter tall. The work is surprisingly sculptural in execution, and it is deeply affecting. The berm edges are spiked with evenly spaced stakes that once guided the grunts and cuts of the bulldozer, undoubtedly driven by a man more accustomed to carving roadbeds and causeways than cursive letters but whose pragmatic expertise was brilliantly turned to art.

Bill stepped over a berm and into the broad shaft of the first "n" and began walking the poem, later writing, "The land turns to prose under my feet." I climbed a small hill to the south to look at the poem. The wind ruffled softly. At the distant edge of the playa, an intense mirage shimmered blue, echoing the Pacific Ocean further west. Other than the poem itself, there were few signs of human action. Rare footpaths headed toward the ocean. I find the base walls of a three-sided windbreak with a sawed cow bone from an encampment sometime in the recent past. The sun-dried carcass of a horned toad baked on a stone. These were the only signs of life: except—of course—for Bill, me, and the poem.

Jerry D. Moore is professor of anthropology at California State University, Dominguez Hills. His research focuses on cultural landscapes, the archaeology of architecture, and human adaptations on the north coast of Peru and northern Baja California. His research has been supported by the National Science Foundation, the National Geographic Society, the Wenner-Gren Foundation for Anthropological Research, the Getty Research Institute, the Institute of Advanced Studies (Durham, UK), and other agencies and foundations. He is the author of Architecture and Power in the Prehispanic Andes: The Archaeology of Public Buildings (1996), Cultural Landscapes in the Prehispanic Andes: Archaeologies of Place (2005), Visions of Culture: An Introduction to Anthropological Theories and Theorists (2012), the 2014 SAA Book Award winner A Prehistory of Home, thirty-five peer-reviewed articles and book chapters, and sixty-seven professional papers.