Part of what I do as an archaeologist is judge between competing claims to truth. Indeed, you could say this is the entire purpose of science. Before we make a judgment about what is true, there are facts that have to be examined and weighed against one another.

When Trump’s senior advisor Kellyanne Conway made her now infamous reference to “alternative facts,” many viewers were stunned. But I am a scientist. I spend my days trying to pull “facts” out of the remains of the past. After thinking about what Conway said, I realized that it was not ridiculous at all.

I’m often asked how archaeologists know whether an object is a stone tool rather than a fragmented rock. We don’t always. Looking at the same rock I might see a tool, while another archaeologist might not. Through science we can usually determine what is true.

We look at how the rock was broken, and whether the breaks were more likely from natural or human processes. We look at wear on the stone to see if it matches that of other known tools. In short, we use empirical observations and methods to decide which description best represents reality.

Conway’s statement was not based on a scientific perspective, but rather on a much older tradition of deciding what is true: the argument from authority.

It was the Enlightenment that gave us science as we know it today. The scientific method was an active creation of men—and a few stalwart women—in the aftermath of the Thirty Years’ War who were intent on upending what at the time was viewed as a venerable method of judging between competing claims to truth: Whatever the people in power said was true. That an individual saw or thought or reasoned something different did not matter. The men who created science believed argument from authority caused the Thirty Years’ War, and they developed science so it could never happen again.

By contrast, Press Secretary Sean Spicer’s statement on the inauguration shows argument from authority in its clearest form: “This was the largest audience to ever witness an inauguration, period.” His attitude isn’t just anti-fact, it’s anti-science.

Are We Entering a Post-Enlightenment World?

We seem to have raised the argument from authority to a new level of acceptance, culminating in this election’s cascade of “false news” and “alternative facts.” I believe it is the culmination of a long retreat from the scientific perspective on truth.

When I was a new professor in the early 1990s teaching human evolution, I found myself pitted against creationists who believed God created humans exactly as we are today, without any process of evolution. Theirs was an argument from authority; specifically, the authority of the first two chapters of Genesis. I did not recognize that argument at the time, and tried to counter it with scientific facts.

I realize now that my approach did not work because we were not arguing about the scientifically accepted facts. We were using different methods of judging what is and what is not a fact. This debate had been active since the Scopes “Monkey Trial” in 1925, where high school science teacher John Scopes was arrested and tried for teaching human evolution in a public school. But in the 1980s, the debate became a tool in the political arsenal of the religious right. Their growing power in American politics rekindled a longstanding American tradition of anti-intellectualism and unease with the scientific perspective.

Empirical data carry little weight against an argument from authority. And the reverse is true too.

In 2010 I became embroiled in a debate within the American Anthropological Association about their revised mission statement, which had thrown into question the role of science in anthropology. All references to “science” had been removed from the mission statement. I argued that anthropology had been led astray by postmodernism and needed to reestablish science as its guide.

Postmodernism arose out of linguistics, but was adopted widely in literary criticism and anthropology. Postmodernism argues that empirical reality cannot be separated from the experiences and biases of the observer. For example, if I were in the crowd at Trump’s inauguration I might think it was the largest ever because it was the largest crowd I had ever experienced. But the experience of someone who regularly attends large events might think the crowd was relatively small. Even though we would be observing the same “fact,” our understanding of the “truth” of the inaugural crowd size would differ because of our differing experiences with crowds. In effect, both would be true. 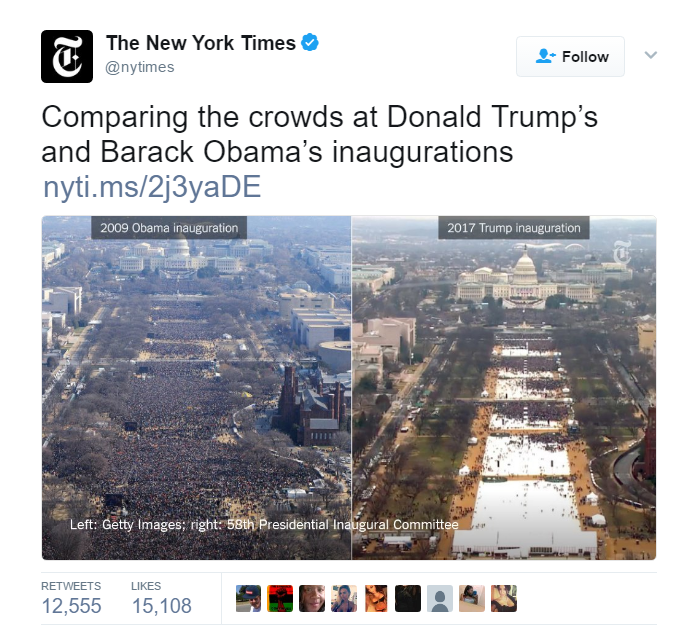 In a postmodern world, facts are slippery because they are shaped by personal experience. In its extreme form, postmodernism melds into solipsism, which is the idea that there is nothing real outside one’s own mind. In solipsism the inaugural crowd exists only in one’s mind. The inauguration broke attendance records because it did in Trump’s mind. In this way all argument devolves into an argument from authority—the authority of the self.

Is Trump’s presidency part of a larger movement toward a solipsistic world? Perhaps. And if so, which solipsist gets to say what is fact and what is not?

And where does that leave science?

We must recognize the logic we use to discriminate fact from nonfact. Showing something to be false by “fact checking” has little impact on those whose facts are determined by authority. If we want to undermine the argument from authority we cannot do it through science—we have to do it by undermining the authority itself. And if we want to undermine science—well, we’ve been doing a pretty good job of that already.

Peter Neal Peregrine is Professor of Anthropology and Museum Studies at Lawrence University.

This article was originally published on The Conversation. Read the original article.