Look Out: Who Picks Up the Tab for Climate-Fueled Wildland Fire? 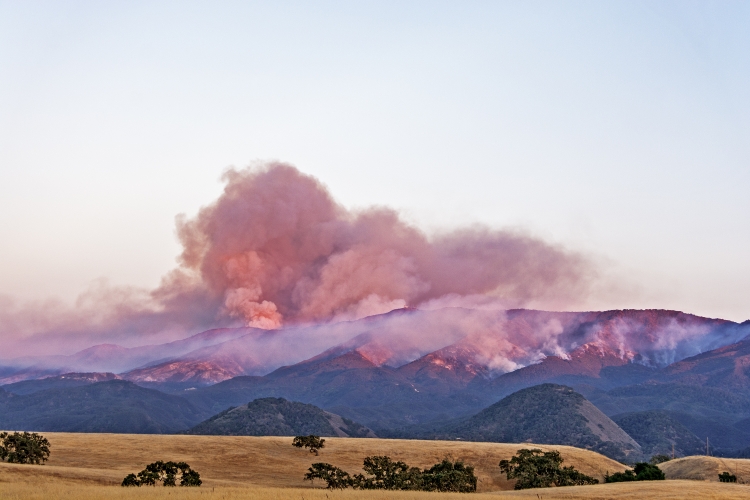 What we do not witness are the armchair accountants totaling up the tab and battling over who owes what to whom . . .

In Southern California, the heat is on. This is not simply because of the 100-degree temperatures that have been scorching the region this July. Adding to the discomfort have been the wildland fires that have erupted in both the central-coast range that got drenched this past winter and those southern counties that remain drought-stricken.

Yet even as the Alamo and Whittier fires roared across Santa Barbara County, chewing through more than 30,000 acres of chaparral and oak woodland, and even as smaller blazes popped up around Los Angeles and San Diego, a very different kind of firefight ignited. One that never makes the nightly news.

Until now, courtesy of an open letter from Mark Ghilarducci, director of California’s Office of Emergency Service, to USDA Forest Service chief Tom Tidwell. In it, Ghilarducci raked the Forest Service over the coals, alleging that the federal agency had stiffed the state for $18 million it owed volunteer firefighters who had battled wildland fires on national forests and grasslands. Calling it "appalling and absurd" that the agency "blatantly ignored its financial responsibility to the men and women of California who have risked their lives fighting fires to protect federal land," he issued a chilling challenge: "I cannot continue to support the deployment of resources to protect federal land that ultimately may bankrupt our local governments."

Ghilarducci’s rhetoric is overheated—there is no way state and local firefighters would sit idly by as an inferno burned across state property into federal acreage; besides, the Forest Service had already paid back $14 million of the $18 million in contention and is in good-faith negotiations with the state about the remaining funds.

However intemperate, Ghilarducci’s letter did us a favor by unveiling the Byzantine complexity of firefighting operations. What we usually see are fire engines rolling out, bulldozers clanking forward, yellow-suited firefighters—Pulaskis and shovels in hand—racing uphill, and air support laying down tons of water and retardant. What we do not witness are the armchair accountants totaling up the tab and battling over who owes what to whom. This clash over cash is not a pretty picture.

This backroom wheeling and dealing, however revealing, may be beside the point. At least when we consider the speed with which climate-fueled fires have been racing through western landscapes (and, yes, dollars). Their velocity has undercut once-stable conceptions of the length of the fire season, how to manage burns large and small, and what agencies might do to restore charred terrain. Upended too are the predictive power of models that researchers and firefighters historically have employed to assess fire regimes. That was one of the more troubling findings in Forest Conservation in the Anthropocene: Science, Policy, and Practice, which I coedited. “Given the lack of analogues to projected climate changes,” report Anthony Westerling and his coauthors, “precise modeling of future changes in vegetation and disturbances like wildfire becomes significantly more challenging for later in this century and beyond.”1

Lacking the capacity to predict and plan only intensifies the pressure that firefighting agencies and fire scientists already feel; it can seem as if the blind are leading the blind. Policymakers are among those compelled to adopt a feeling-our-way-forward approach. That’s because, as V. Alaric Sample and Christopher Topik argue, a “more dynamic policy framework is needed as a basis for natural resource management that can adapt to climate change.” Their argument comes with a crucial caveat: “The most important lesson is not that the existing policy framework should be replaced, but that the policies themselves must be dynamic enough to accommodate rapidly changing environmental conditions.”2 Nature is evolving fast, and the human response must be just as quick.

Accountants, take heed. In calculating the sharp increase in dollars spent on emergency wildland fire suppression, for example, Sample and Topik include a line item that those fixated on a narrow conception of the bottom line frequently ignore: opportunity costs. These unacknowledged (and thus unaccounted for) losses result directly from “the ever smaller pool” of money left over to “support hazardous fuels reduction, recreational access, watershed protection, and the variety of other services that the American people value and expect.”3 As wildland fires torch agency budgets, they also limit funds available for policy options that might make public lands more resistant and adaptive to climate change’s disruptive force.

To make our way in this new, uncharted world we will need to be a good deal more resilient, nimble, and collaborative than we have been in the past. This may be the only way to beat the heat.

Char Miller is the W. M. Keck Professor of Environmental Analysis at Pomona College in Claremont, California, and coeditor of Forest Conservation in the Anthropocene and forthcoming University Press of Colorado title The Nature of Hope: Grassroots Organizing, Environmental Justice, and Social Change.