Batman and the Authenticity of Material Culture

We should not view traditional images and symbols as somehow more “authentic” than other, more modern ones.

I recently returned from a brief professional board meeting in Guatemala. As always, I gained a lot of energy from being there, seeing old friends and meeting new ones. While there, I was able to shop for wooden masks. Over the years, I’ve collected a number of Guatemalan traditional masks, some new, some quite old, all representing different animals and characters. Indigenous Maya across Guatemala use masks in dance performance to convey stories or commemorate events, such as the arrival of the Spanish or celebration of the rainy season. 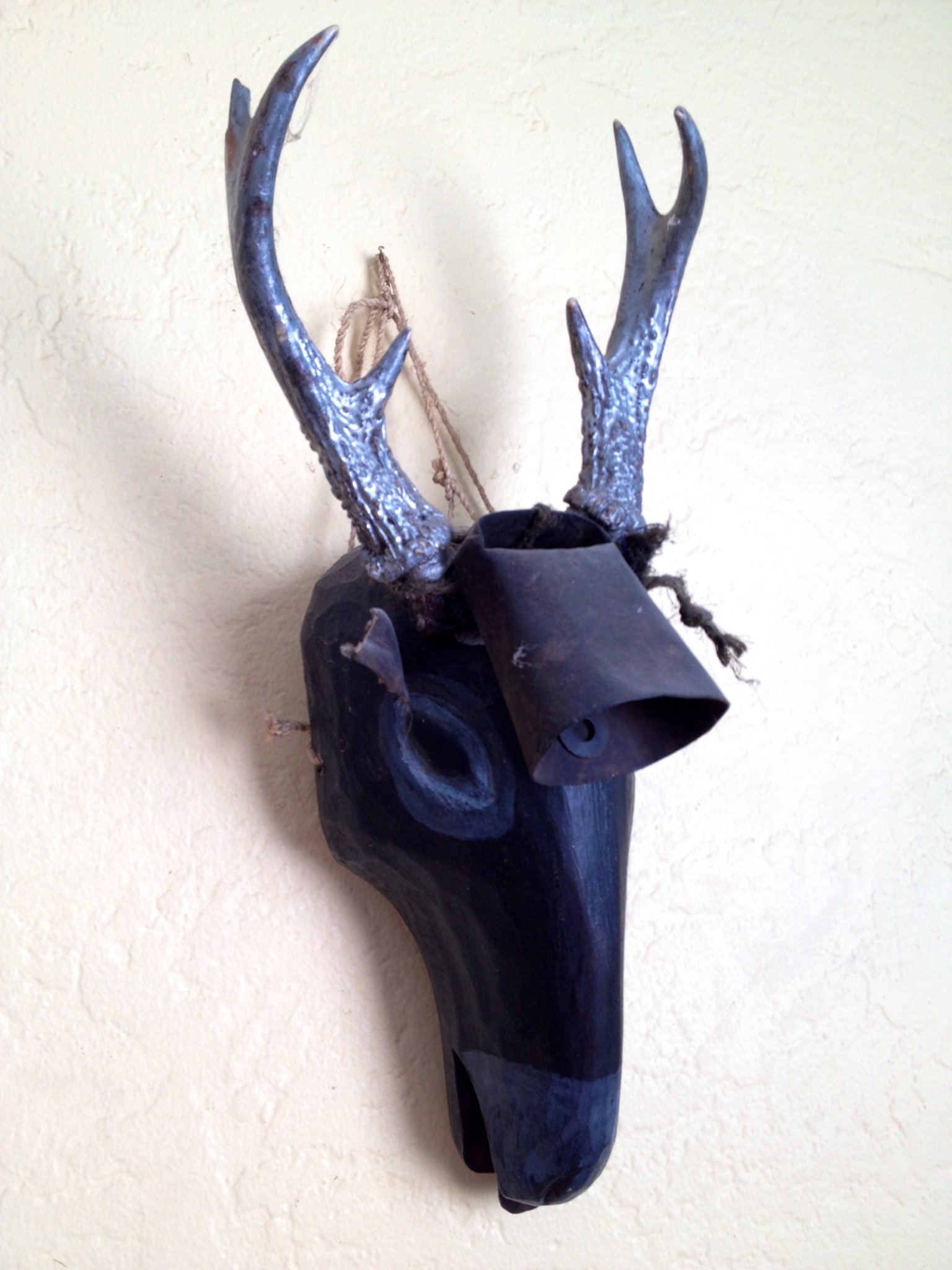 Example of an old, traditional Guatemalan wooden deer mask, used in dances, from the town of Chichicastenango in the Guatemalan highlands.

I purchased two wooden masks this trip. One, from a fair-trade dealer in Antigua, portrays a deer and is multicolored, with actual deer antlers attached to the top. Fastened to the antlers are several colorful reflective flags and small noise-making chains. This very traditional mask must have been used in dances and is likely from one of two highland Maya communities: Chichicastenango or Nahualá. The other I found in a public market in Guatemala City, and it is quite different: it represents Batman. As in “Holy Guacamole, Batman, was that the Joker?” Clearly, the mask was designed for kids, based on its size and the character it portrays. Many people’s first reaction might be to think that this mask isn’t “real” or “authentic,” since it isn’t a traditional design. It doesn’t represent a deer, cow, or blond-bearded conquistador but rather a comic book hero. It was made for everyday use or display, not for special ritual use. I purchased it because I liked it and thought it was unusual. 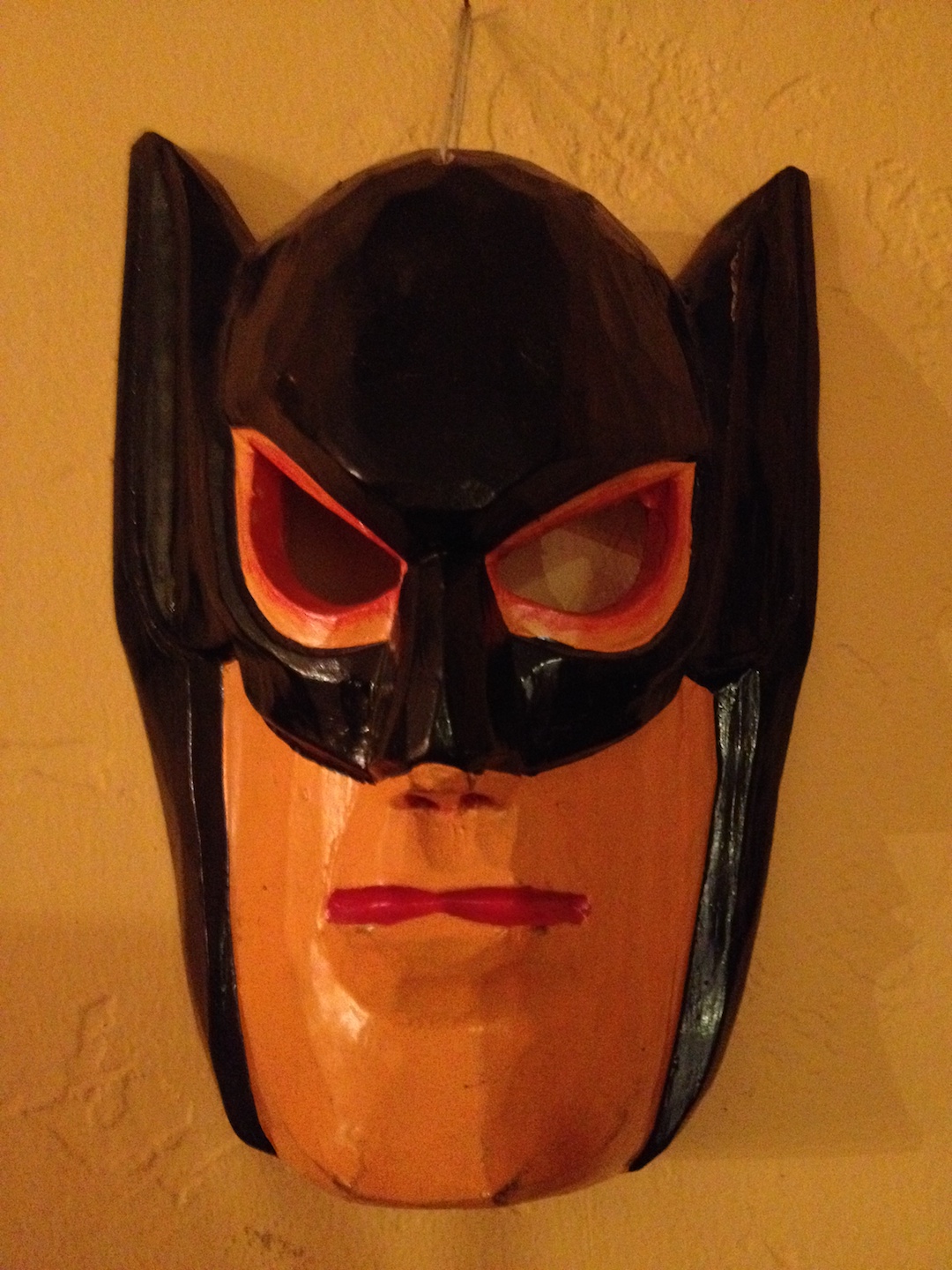 As the days have passed, I’ve thought more about the mask and other examples of hybridity in modern society. Matt Liebmann recently wrote about hybridity and material culture and refers to these hybrid items as originating in two different worlds: one traditional and one modern. In his 2015 study, he offers a mid-twentieth-century example from the American Southwest, wherein Hopi tribal members produced Mickey Mouse kachina dolls. Though they depict a commercial character, the dolls also convey traditional values and stories related to a legendary mouse named Tusan Homichi. The modern commercial image and character of Mickey Mouse resonated with traditional kachina doll makers and, later, kachina performers (Liebmann 2015).

My Batman mask is made out of wood, like other more traditional Maya dance masks. I would have expected a mask for children to be made out of a cheaper and more easily-manufactured material, like plastic or papier-mâché. While Batman is certainly a contemporary commercial character, there are several long-lived Maya traditions related to bats. In Maya mythology, bats are associated with night and darkness, death, and sacrifice, as seen in the Maya bat god Camazotz, the Death Bat. In the Popol Vuh, the K’iche Maya origin story, Camazotz decapitates the Hero Twin named Hunahpu. Paradoxically, bats live in both caves and mountains, which in Maya belief systems are places of water and fertility. As a result, while this Batman mask was not made for traditional dances but for children, traditional Guatemalans might find meaning in a mask that’s not readily apparent simply by viewing it as a commercial advertisement for a comic-book hero.

In the Guatemalan Maya village where my wife, Jill, and I work with a nonprofit aid organization, I’ve learned that women weavers in the village use both traditional and modern images in their textile designs. Traditional women’s woven blouses, called huipiles, are embellished with colorful designs identifiable as originating from a particular village. These traditional and popular designs include images of birds, monkeys, flowers, and other natural objects. Huipil designs in the village sometimes also incorporate more unusual images, such as elephants. Clearly elephants aren’t native to Guatemala, but at some point in the past, women in the village were exposed to them (possibly via photographs, television, or travel), became enamored with them, and began to incorporate elephants into their traditional designs. When I asked what the elephants represented, I was told by the weavers that they simply liked them.

My point here is that we should not view traditional images and symbols as somehow more “authentic” than other, more modern ones. Within colonial contexts, as Lee Panich (2013) has recently put it, people are in a constant process of “becoming” and their material culture continues to convey messages and images, although not necessarily in the same way as in the past. We regularly see this hybrid mishmash of modern and traditional in many cultures through time and should not be surprised by it. For example, during the Mission period in California, small white glass trade beads were a common item used in trade between colonists and indigenous groups. For thousands of years, shell beads had been used as a medium of exchange across California. Glass trade beads, while made of a different and exotic material, were incorporated into both ritual and everyday life, in part perhaps because they were readily available and could function in similar ways. Through time, cultural norms and interpretations of the past and present change and material culture responds and reflects these changes. As such, new designs and images convey new ideas and senses of place in the modern world.

(A version of this essay was previously published in Glyphs: The Monthly Newsletter of the Arizona Archaeological and Historical Society 68[6]: 2–4.)

References
Liebmann, Matthew. 2015. “The Mickey Mouse Kachina and Other ‘Double Objects’: Hybridity in the Material Culture of Colonial Encounters.” Journal of Social Archaeology 15(3): 319–41.

John G. Douglass is the director of corporate research at Statistical Research, Inc. and is also a visiting scholar at the University of Arizona’s School of Anthropology. He has undertaken archaeological research in California, the American Southwest and Midwest, Honduras, and Belize over the past twenty-five years. Over the past decade, he has focused his research interests on colonial/indigenous interaction in the American Southwest and California from both archaeological and ethnohistoric perspectives. With William M. Graves, he is coeditor of the award-winning New Mexico and the Pimería Alta: The Colonial Period in the American Southwest.