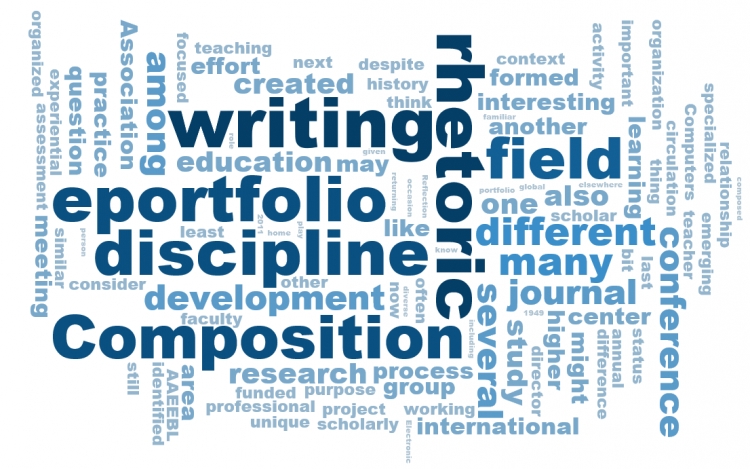 How and why do fields become disciplines? A distinguished scholar in writing studies explores the field of ePortfolios in relationship to the evolution of rhetoric and composition.

I’m returning from a conference focused on ePortfolios, and it’s given me the occasion to think a bit about fields and disciplines.

Electronic portfolios are familiar to many, but what many in writing studies and elsewhere may not know is that ePortfolio is now an area of study. The field is both global and diverse, composed of people who play many different roles in higher education, among them faculty from several different home disciplines, including at this conference scholars in history, design, math, education, psychology, political science, and medical research. In addition, ePortfolio practitioners and scholars include career center directors, technology specialists, advisors, experiential learning directors, institutional researchers, and faculty developers. Such diversity of membership means, among other things, that these colleagues bring with them very different understandings of research and research processes, different experiences with distribution and circulation of information, and, often, different perceptions of the appropriate purposes of ePortfolio: are they chiefly for assessment, for learning, for identity development, for finding employment, or for achieving another aim?

Despite these differences, and despite some interesting differences in the cultures situating higher education from one country to the next, those working on ePortfolio efforts have during the last decade formed what they consider a field. A professional organization, the Association for Authentic, Experiential, and Evidence-Based Learning (AAEEBL.org), was formed with its purpose, in part, to help in coordinating and consolidating efforts. AAEEBL hosts and co-sponsors various meetings, among them an annual international meeting, several annual regional meetings, and several webinars. An open-access journal, International Journal of ePortfolio (IJeP), was created in 2011. Several co-authored and co-edited volumes on ePortfolios have been published. A FIPSE-funded research effort, the Catalyst Project, brought together over twenty US institutions of higher education to develop a model of ePortfolio implementation, while the European Union funded a similar three-year project. As this quick description suggests, then, there is currently considerable ePortfolio activity, which has also been identified, like writing, as a high-impact practice. Still, in this context it’s a bit difficult to imagine this field, which is still in the process of becoming, as a discipline, but that's probably true of all fields in the early stages of development. Some will remain a field, while others will grow into a discipline.

Comparing this nascent ePortfolio field with rhetoric and composition reminds me both of writings studies’ history and of our current status. For those teaching writing in post-war US schools, like those working in ePortfolios now, there was a similar moment of activity and coordination. What structures, these teachers of writing asked, might foster conversations about pedagogical practices, provide for wider circulation of emerging practice and knowledge, and contribute to a sense of collegiality? In 1949, in response to these needs, the Conference on College Composition and Communication (CCCC), a professional organization with a scholarly journal, was created. Other scholarly areas within this new field of rhetoric and composition also organized—and continue to do so: the Council of Writing Program Administrators was formed; Computers and Writing hosted conferences related to the journal Computers and Composition; the National Writing Centers Association went international; the Journal of Second Language Writing was created; and most recently, the Association of Rhetoric and Writing Studies (ARWS) Undergraduate Programs, focused on the major in rhetoric and composition, was created, as was the Lifespan Writing group, which just held its inaugural conference the last week of May. These more specialized groups, which several scholars and teachers understand as fields in their own right, are in relationship to what has become the discipline of rhetoric and composition. Precisely what that relationship is strikes me as a very interesting question, one that, of course, might be different from one group to the next.

What's also interesting to me—and I hope to you—about this comparison of ePortfolios and writing studies are a couple of other things. One is that looking at another emerging field like ePortfolios casts in relief the status of composition and rhetoric. Another is that at the same time that we have learned about writing, about the teaching of writing, and about the many contexts of writing, we have also had something of a center to support the development of specialized areas. Consequently, many in rhetoric and composition identify with at least two areas, if not more—with rhetoric and composition, digital composing, and writing assessment, for example, or with rhetoric and composition, visual rhetoric, and community literacy. And a third observation is that our development into a discipline wasn’t planned: as we identified increasingly important questions to answer and positions to advocate for, we organized, in the process creating a flexible disciplinary framework allowing for, even fostering, exchange, debate, and, often, a contingent coming to terms. Not least, during this concurrent longitudinal and horizontal development, rhetoric and composition’s attention to pedagogy has continued to inform the discipline, and in that dimension, we appear unique among disciplines.

How and why rhetoric and composition might be a unique discipline, and how important that is for our future: those are good questions, I think, for us to consider.

Kathleen Blake Yancey is Kellogg W. Hunt Professor of English and Distinguished Research Professor at Florida State University and past president/chair of NCTE, CCCC, and CWPA. The recipient of several awards, she has authored/edited many articles/book chapters and books, most recently Composition, Rhetoric, and Disciplinarity.