Death by Proxy: Breaking New Ground with Leisure and Death and The Rolling Stones 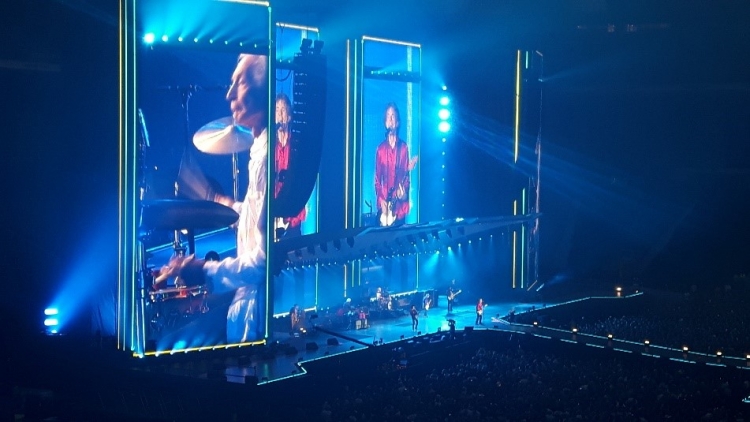 The Stones at Twickenham from the Press Box, © J. Skinner 2018

The deceased are the proxy for us—a stand-in, an unfortunate substitute for our own mortal fears or desires. Their death gives us a subjunctive pause for thought: “What if that were me?”

My new volume with Adam Kaul, Leisure and Death, is a mortality tour led predominantly by anthropologists. We give examples from around the world of tourists and travellers, academics, leisure seekers, and lovers and their deliberate and/or accidental relationships with death. These are all accounts of proxy relationships with death in that contributors have not, or cannot have, experienced death directly and lived to tell the tale—Cyril Schäfer sadly came closest, dying whilst writing his chapter in our volume. These are accounts and analyses of death askance or at a distance, be it close or far: in passing, in relations, always in the Other as anthropological subject. By proxy, we do not act for the deceased. And our writing about them is the only tenuous authority over them or their situation that we might have. Rather they are the proxy for us—a stand-in, an unfortunate substitute for our own mortal fears or desires. Their death gives us a subjunctive pause for thought: “What if that were me?”

This proxy relationship with death is unsettling but serves as a driving force for creativity. It challenges the quotidian that we have grown used to. It takes away the ground underneath us. In death-witnessing, its fragility and its boundedness with life, there is also an engagement with life—a meditation leading to mediation but not necessarily moderation. For Erica Lehrer, in her decade-long study Jewish Poland Revisited: Heritage Tourism in Unquiet Places, death-witnessing can also be political. To give an example, visiting Auschwitz is not just some God-awful “necro-nostalgia” (Lehrer 2013, 8) but can serve as a political instrumentalisation of the past, a reconciliation of heritage and memory taking place through the contentious and possibly reductionist dark tourism frame; post-Holocaust Jewishness, in particular the absent imagined gaze from those denied a life there. This is a past subjunctive imagination—a “what if.” What if I had lived through this, or died here? What if the Holocaust had not happened and I had grown up here? We read of Nate who wears his “I’m a Jew. Fuck You” T-shirt throughout his visit, projecting the subjunctive identity of his unlived life over here, of what might have been (Lehrer 2013, 99). This is traumatic inheritance writ across his back.

Of course, not all mortality tours are so dark and harrowing. Just this week around Twickenham, Richmond, I was surrounded by t-shirts bearing a different protest: Rolling Stones tour dates, advertising a tribe of fans—in this case ardent Argentine “Rolingas” continuing their support for English music from when it had been banned by their junta. Subcultures are big band brands now, not least The Stones. Pre-concert I saw one Zizzi-restaurant-chain-branded waiter serving to a logo-branded Stones fan; hearty “Individually Italian” cuisine advertised right back at the iconic logo lips and lolling tongue logo. Myth has it that the tongue hanging down is more a reference to Kali, Hindu goddess of death and time, than to Mick Jagger’s lips. 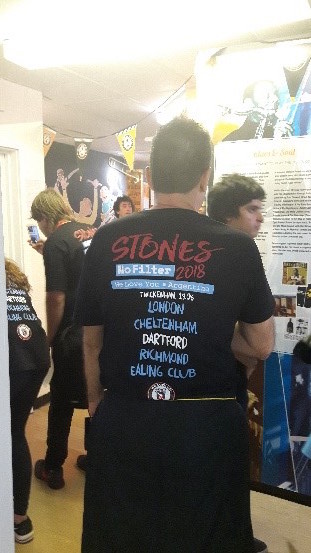 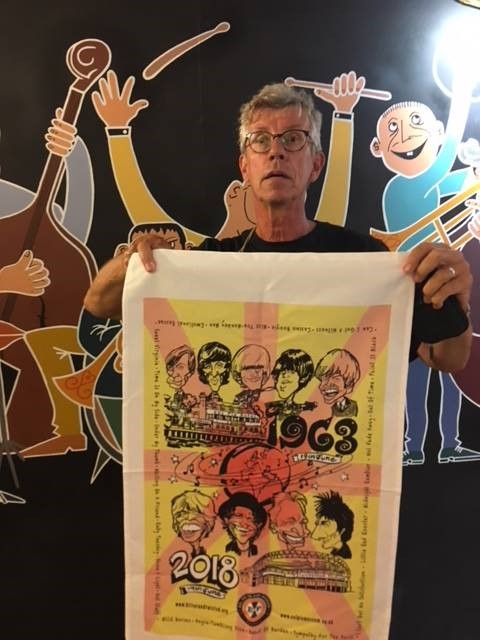 Stones fan with souvenir print, © Eel Pie Museum 2018 with thanks.

The Rolling Stones formed in London in 1962, and settled on their composition and played some of their earliest gigs in Richmond with a summer residency on Eel Pie Island, Twickenham, in 1963. They played here on June 19, 1963 and were playing nearby exactly fifty-five years later. These rock legends have a trail of musical heritage in their wake around this part of the Thames—seen and played upon at Eel Pie Island Museum and One Kew Road, location of the original Crawdaddy Club where The Stones collided with The Beatles, the one band an antithesis of the other. The commemorative memorabilia, “commemorabilia,” of this prescient concert was not lost to fans, promoters, rock heritage activists, and novice enthusiasts such as myself (see Fig 2). Catch them whilst you can was my first thought, before they die; my co-editor, Adam Kaul, had a similar thought leading to his attendance at a Dylan concert. He was saddened by the self-caricaturisation of the singer-poet spinning out big concerts.

Back in West London, we relive or re-animate a version of the past by first treading the footbridge to Eel Pie Island to get close to the site of Eel Pie Hotel where in the jazz club, over a half-century ago, The Stones gigged along with The Yardbirds, The Who, Pink Floyd, Genesis, Black Sabbath, Rod Stewart, David Bowie, Hawkwind, and Acker Bilk. This is where British R&B erupted, and where “the Thamesbeat” challenged the libertines of East London. For me, this was sixties counterculture by proxy: my imaginative nostalgia for the place where it all started before my birth now reawakened by the return of the band. This was an opportunity to see how they have aged and weathered their rock ‘n’ roll lifestyle “Dancing with Mr-D” before they lost their last dance. Poignantly, after climbing the pedestrian bridge to the island and walking the paths between the houses, we saw that the hotel is now a series of bijou townhouses called Aquarius.

Leisure and death combine in curious ways; here imminent death motivates immediate leisure—we attend the gig to see them whilst we can and whilst they are still around. The motivation for the present grandstanding was thus both retrospective and prospective in my imagination: an existential silhouette on my mind to nostalgia for a flowery past; and, “wakeful,” a looming gloomy premonition for the forthcoming future. In the end, the concert was a great success with larger-than-life displays showing us the larger-than-life rockers. Jagger does in fact still have the “Moves Like Jagger” as they say; lithe, androgynous, shaking his hands and his hips at the audience. Charlie had his kindly bemused smile on his face. Ronnie and Keith alternated an “out of it” look. They left us satisfied that night even though it was a far, far cry from their past with them belting out of the fans’ favourite numbers. The tour play list ends each night with “(I Can’t Get No) Satisfaction” and some pyrotechnics, both referencing a commercialism and sexual frustration. If I closed my eyes, though, it was as if I had been there the first time after all and I had not missed them—or the heady sixties—before they have gone.

Jonathan Skinner is a reader in anthropology at the University of Roehampton and adjunct fellow at the Centre for Cosmopolitan Studies, University of St. Andrews. He is the author of Before the Volcano, editor or coeditor of several books, coeditor of the book series Movement and Performance Studies, and advisor to the arts health charity Arts Care.