The Challenges and Rewards of Underwater Research 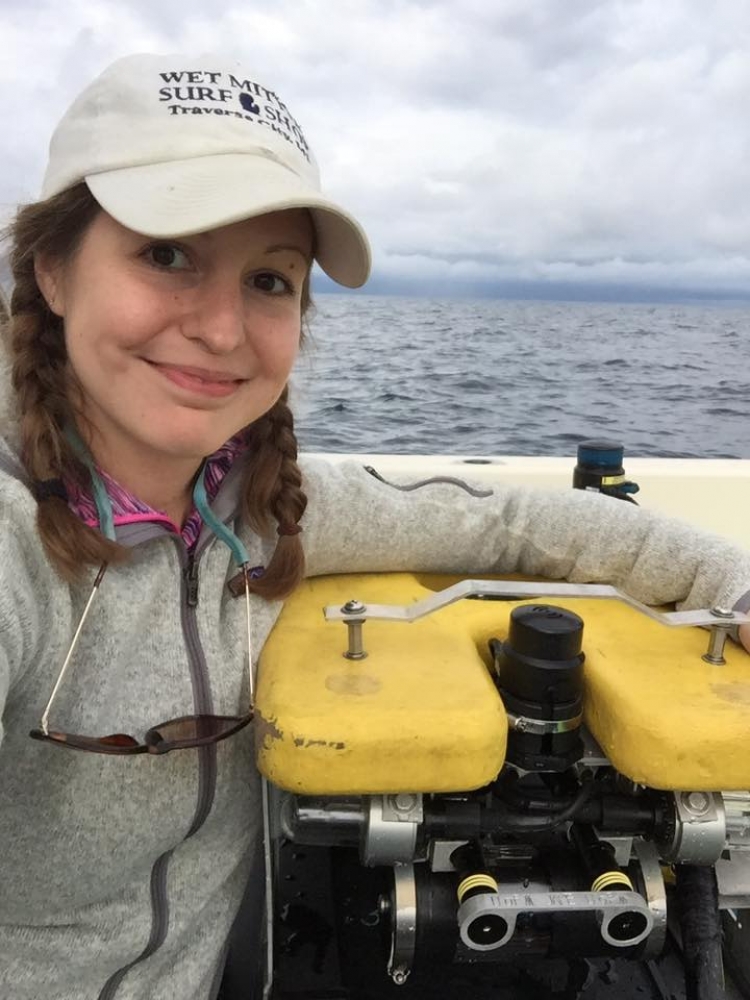 Ashley Lemke and the ROV

Underwater archaeology is not just about shipwrecks anymore.

Not many archaeologists can operate sonar—and most archaeologists don’t need to. Traditional archaeological field work is tough; it involves physical labor, uncomfortable temperatures, and long hours. Archaeological field work under water has all these challenges plus additional challenges, many of them technological. Archaeologists working on land are not unaccustomed to technology. We regularly use GPS, GIS, and a whole range of remote sensing equipment including ground-penetrating radar, magnetometers, and electrical resistivity meters, among others. This equipment allows us to see what’s below the surface to find new sites and to guide our excavations before we ever start digging. The application of similar technologies for comparable purposes to an underwater environment has its own unique set of difficulties.

Huge expanses of land were exposed at the end of the last ice age, when much of the earth’s water was frozen in glaciers. Over the last million years sea-level fluctuations exposed, and then submerged, some of the best land available for hunting and gathering—the primary way of life for prehistoric peoples. Remains of wooly mammoths and other now extinct fauna have been found underwater in the North Sea and off the American coasts in both the Pacific and Atlantic Oceans—evidence that these areas used to be dry land. In addition to these paleontological specimens, archaeological remains of stone tools, boats, and human remains have been recovered underwater all over the world. These sea-level and habitat changes across the globe are mirrored on a local level in the North American Great Lakes. At the end of the last ice age, water levels in Lake Huron were 100 meters lower than they are today. This exposed a land bridge across the modern lake basin that connected lower Michigan to Canada. It was hypothesized that caribou populations used this landform during their migrations, and that prehistoric peoples hunted the caribou.

The Great Lakes hold a large portion of the world’s freshwater and are often referred to as inland seas, since they share so many characteristics with oceans—rolling waves, sustained gale-force winds, strong currents, great depths, and distant horizons. The weather is the biggest challenge working offshore. Most terrestrial projects schedule four- to six-week seasons of digging and research; you are likely to have some “weather days”—too wet, too cold, too hot, etc.—during these seasons, but usually only one or two. Research in the Great Lakes, however, is completely determined by weather. You need the right combination of wind, waves, and currents to ensure the safety of your boat, crew, and research equipment. The Great Lakes are frozen for a large portion of the year, and the workable season is basically late April to October. Within this time frame you watch for windows of good weather, about two to five days long.

Once there is a window, the crew goes into action. Before we put scuba divers in the water, we undertake several stages of research using different techniques to find and map prehistoric sites now under more than 100 feet of water. For studying of sites in the Great Lakes, large areas are first mapped using multibeam and side-scan sonars. These sonar surveys provide base maps of the underwater topography and help to characterize what the ancient environment would have looked like in terms of elevation and other features, such as rock outcrops, streams, rivers, and lake beds. Occasionally, if we’re very lucky, this type of sonar imagery, even at a large scale, can find archaeological sites such as the caribou hunting sites we discovered beneath Lake Huron. Long lines and V-shapes made out of rocks were used to channel caribou into killing areas, and because these hunting blinds and structures are made out of rock, they are bright acoustic reflectors that appear on sonar.

After the larger surveys with multibeam and side-scan, smaller areas are targeted for intensive mapping and investigation. We use autonomous underwater vehicles (AUVs), which can pass, unhindered by a cable, right over archaeological sites on the bottom and map them with high-resolution sonar. Scanning sonar (a tripod with a rotating sonar in the middle) can map individual structures. After sites are mapped, we explore them with a remote operated vehicle (ROV) an underwater robot with live video so that we can look for good diving targets. Finally, scuba divers go in to take samples and excavate at the sites—just like we do on land. (We just happen to be underwater!)

The weather, all of these technologies, and scuba diving in 45ºF water 100 feet deep all offer unique challenges to the archaeologist. You have to be patient, adaptive, innovative, and creative, but it is more than worth the effort. With this research design we can create a map of a 9,000-year-old hunting landscape, and we’ve recovered stone tools and organic remains hat rarely survive on land, like bones, wood, trees, plants, and charcoal.

Investigating submerged prehistoric sites is the next frontier of archaeology. The answers to some of the biggest questions we ask about the past—how and where did human culture evolve? how and when did we colonize every continent? when did humans first live on coasts, and fish, and use boats?—lie underwater. Even with the challenges, perhaps sonar should be in every archaeologist’s tool kit.

Ashley K. Lemke is assistant professor at the University of Texas at Arlington and visiting assistant professor at the University of Michigan. She is the recipient of the Louise Williams Distinguished Dissertation Award and the Diversity Field School Award from the Society for Historical Archaeology for her commitment to archaeological practices that foster diversity. A chapter in the forthcoming volume she edited, Foraging in the Past: Archaeological Studies of Hunter-Gatherer Diversity, discusses her underwater research in the Great Lakes.