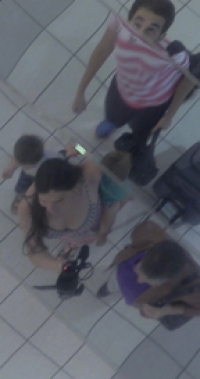 Published by the Computers and Composition Digital Press, an imprint of Utah State University Press

Cámara Retórica: A Feminist Filmmaking Methodology for Rhetoric and Composition is a video book comprised of six video-essay chapters that connect film and video production, feminist filmmaking, and Rhetoric and Composition. Drawing from interviews conducted with ten faculty and graduate students in the field who produce and teach the production of moving images, as well as original footage and clips created by rhetoricians and filmmakers, Cámara Retórica weaves a visual and aural tapestry that performs the kind of feminist, moving-image scholarship it argues can be transformative for Rhetoric and Composition. The video essays develop six principles of feminist filmmaking and apply them to the ways in which faculty and graduate students in Rhetoric and Composition engage with film and video production—from learning the technology, to publishing and screening their work, to making traditional and non-traditional modes of recognition for their films and videos count for tenure and promotion. We hope that Cámara Retórica provides a roadmap and inspiration to any scholar who has ever wanted to pick up a camera and experiment, play, create, and transform through the combination of images and sound.

The goal of the CCDP imprint is to honor traditional academic values of rigorous peer review and intellectual excellence, but at the same time to create a venue for innovative digital scholarship and expression in the field of English composition and rhetoric. Volumes in the CCDP series are published under a Creative Commons copyright license, and are available open-access.