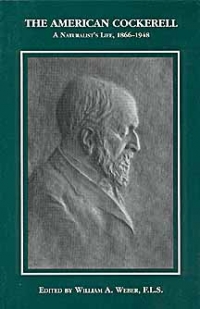 In The American Cockerell: A Naturalist's Life, 1866-1948, botanist William A. Weber pulls together pieces of the life of T.D.A. "Theo" Cockerell, a man who was an internationally known scientist, a prolific writer, and a highly regarded teacher at the University of Colorado at Boulder. The elder brother of the noted scholar Sir Sydney Cockerell, Theo labored in relative obscurity in America while his brothers and their families were basking in the limelight of smart British society.

Despite his alienation from his elite background, he nevertheless became a great teacher, a mentor, a kindly artist and writer of rhymes for children, and the greatest specialist on bees in the world. His contribution to the understanding of wild bees is monumental—he catalogued over 900 species in Colorado alone, and he assiduously collected them wherever he traveled. By 1938 he had published the names and descriptions of 5,480 new species and subspecies. Despite his accomplishments in entomology, however, T.D.A. Cockerell resisted specialization. He was also an early supporter of women's rights, a Morrisian socialist, an avid reader, and author of almost 4,000 published scientific papers, book reviews, and discussions of social issues.

Pieced together from T.D.A.'s little-known autobiographical writings, demonstrates this extraordinary individual's tremendous breadth of interest, competence, and talent. It will be of interest to scientists and lay readers alike.

William A. Weber is Professor and Curator Emeritus of the Herbarium, University of Colorado Museum of Natural History and Fellow of the Linnean Society of London. A highly acclaimed author with over 65 years of botanical experience in Colorado, he has written extensively on the flora of Colorado, including Rocky Mountain Flora (UPC 1991), A Rocky Mountain Lichen Primer (with James N. Corbridge, UPC 1998), and three books with Ronald Wittman: Bryophytes of Colorado (Pilgrims Process 2010), Colorado Flora: Western Slope (UPC 2001) and Colorado Flora: Eastern Slope (UPC 2001).