by Marilyn A. Masson 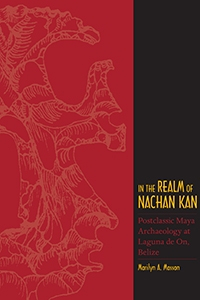 "This book will leave little question as to what was going on at Laguna de On throughout its occupation and the possible roles the site may have had in a broader regional culture history . . . [It] is valuable reading for those studying the Maya Postclassic period, the prehistory of the eastern Yucatan peninsula, and issues of state formation."
—Latin American Antiquity

The prevailing view of the lowland Maya during the Postclassic period (A.D. 1050-1500) has been one of an impoverished, "degenerated" society devoid of cultural accomplishment. Marilyn A. Masson offers a fresh interpretation of this society as one that represented a complex, sophisticated, extensive organization of semiautonomous units that were closely integrated, yet embraced a decentralized political economy.

In the Realm of Nachan Kan opens a window on Postclassic Maya patterns of cultural development and organization through a close examination of the small rural island of Laguna de On, a location that was distant from the governing political centers of the day. Using diachronic analysis of regional settlement patterns, ceramic traditions, household and ritual features, and artifacts from the site, Masson tracks developmental changes throughout the Postclassic period. These data suggest that affluent patterns of economic production and local and long-distance exchange were established within northern Belize by the eleventh century, and continued to develop, virtually uninterrupted, until the time of Spanish arrival.

In addition, Masson analyzes contemporary political and religious artistic traditions at the temples of Mayapan, Tulum, and Santa Rita to provide a regional context for the changes in community patterns at Laguna de On. These cultural changes, she maintains, are closely correlated with the rise of Mayapan to power and participation of sites like Laguna de On in a pan-lowland economic and ritual interaction sphere. Offering a thoroughly new interpretation of Postclassic Mayan civilization. In the Realm of Nachan Kan is a must for scholars of Mesoamerican history and culture.

Marilyn A. Masson is professor of anthropology at the University of Albany, State University of New York, and co-director of the Economic Foundations of Mayapán Project.