The Chinese on the Rocky Mountain Mining Frontier 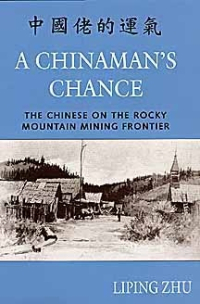 Writers and historians have traditionally portrayed Chinese immigrants in the nineteenth-century American West as victims. By investigating the early history of Idaho's Boise Basin, Liping Zhu challenges this image and offers an alternative discourse to the study of this ethnic minority. Between 1863 and 1910, a large number of Chinese immigrants resided in the Boise Basin to search for gold. As in many Rocky Mountain mining camps, they constituted a majority of the population. Unlike settlers in many other boom-and-bust western mining towns, the Chinese in the Boise Basin managed to stay there for more than half a century.

Thus, the Chinese portrayed all the stereotypical frontier roles—victors, victims, and villains. Their basic material needs were guaranteed, and many individuals were able to climb up the economic ladder. Frontier justice was used to settle disputes; Chinese-Americans frequently challenged white opponents in the various courts as well as in gun battles.

Interesting and provocative, A Chinaman's Chance not only offers general readers a narrative account of the Rocky Mountain mining frontier, but also introduces a fresh interpretation of the Chinese experience in nineteenth-century America to scholars interested in Asian American studies, immigration history, and ethnicity in the American West.

Liping Zhu is Chair of the History Department at Eastern Washington University.